Fornite has announced permanent discounts of up to 20% off on V-Bucks and real-money via direct payment.

The ability to pay Epic Games directly circumvents Apple's 30% cut and violates App Store guidelines; however, these rules are already under investigation for being anti-competitive.

--
If you want to unlock features or functionality within your app, (by way of example: subscriptions, in-game currencies, game levels, access to premium content, or unlocking a full version), you must use in-app purchase. Apps may not use their own mechanisms to unlock content or functionality, such as license keys, augmented reality markers, QR codes, etc. Apps and their metadata may not include buttons, external links, or other calls to action that direct customers to purchasing mechanisms other than in-app purchase.
--

Epic Games says that Apple has approved direct payments in thousands of other apps and should not be preventing games from offering the same option.

Thousands of apps on the App Store approved by Apple accept direct payments, including commonly used apps like Amazon, Grubhub, Nike SNKRS, Best Buy, DoorDash, Fandango, McDonalds, Uber, Lyft, and StubHub. We think all developers should be free to support direct payments in all apps. In operating Fortnite on open platforms and operating the Epic Games Store, Epic has processed over $1,600,000,000 of direct payments successfully, and uses industry trusted encryption and security measures to protect customer transactions.

Notably, Epic Games says that if Apple lowers its fees, it will pass those savings on to customers.

You can download Fortnite from the App Store for free at the link below. 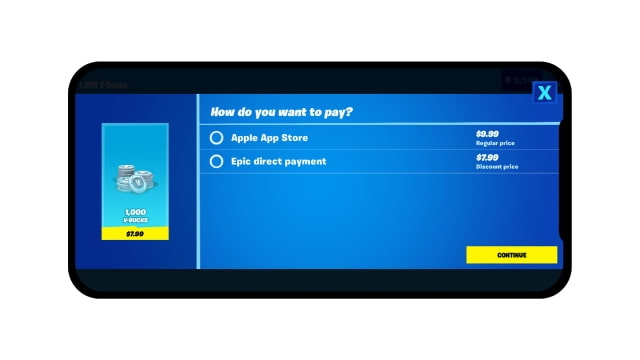