Global notebook shipments surpassed 200 million for the first time in 2020 with the highest ever 22.5% year over year growth, reports TrendForce. Shipments are expected to grow in 2021 as well, reaching 217 million units, an 8.6% increase YoY.

Notably, high demand for Chromebooks has dropped Windows' market share under 80% for the first time ever. TrendForce expects the market shares of Windows, Chrome OS, and MacOS to each stabilize at about 70-75%, 15-20%, and below 10%, respectively.

In November 2020, Apple launched its new M1 MacBook Air and M1 MacBook Pro, reaching just 0.8% market share for the year. However, Apple Silicon's market share is expected to significantly increase next year, especially after the launch of new 14-inch and 16-inch MacBook Pros.

Apple adopted the ARM architecture primarily to optimize MacBook performances. Along with the release of Apple Silicon M1, Apple has also completed the integration between its hardware, software, and SaaS platforms. The company is expected to release 14-inch and 16-inch MacBook Pros, both of which will be equipped with Apple’s in-house CPUs, after 2Q21, raising Apple’s notebook market share to about 7%. The 7% and 20% market shares from Apple and AMD, respectively, mean that Intel will be faced with increasing competitive pressure in the market and need to deliver an appropriate product strategy in response. 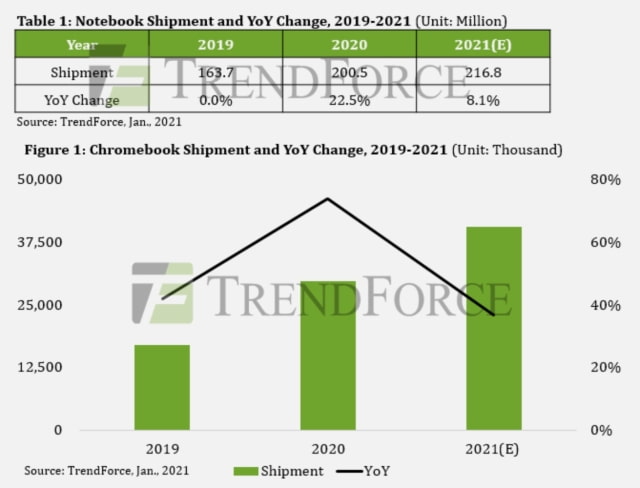