The average amount of storage capacity for smartphones is increasing, according to a new report from Counterpoint Research. It found that average capacity crossed the 100GB mark last year.

The global smartphone industry is experiencing an increasing trend of adoption of larger NAND capacities. In 2020, smartphones crossed the 100GB mark for average NAND capacity. The high-end smartphones benefitted from the high-capacity and high-speed UFS NAND, whose prices reduced significantly in the past two years, according to our Component Price Tracker.

Due to its high selling price, Apple has typically offered more storage than its Android rivals but this is quickly changing.

With their higher price point, iPhones have historically retained a much higher average NAND-flash density compared to their Android peers. However, this gap is quickly reducing due to (i) Apple’s decision to limit the iPhone 12 storage to 512GB and (ii) rapidly rising storage capacities in Android smartphones as per our historical data and forecast of smartphone memory for the 2018-2024 period.

Notably, Apple comes in second next to Huawei who averaged 150GB of storage for its smartphones compared to 141GB for Apple.

Hit the link below for the full report. 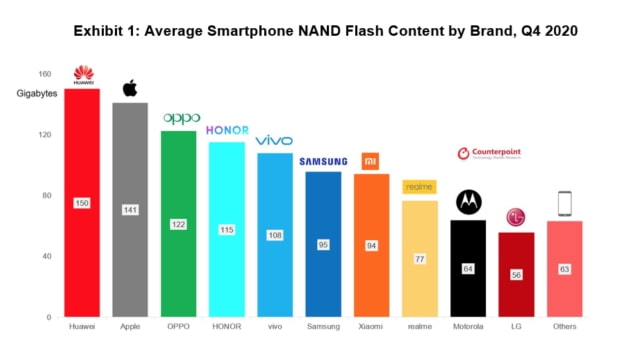