Shipments of wearables were up 34.4% year over year in the first quarter of 2021, according to a new report from IDC. Makers shipped a total of 14.6 million units in 1Q21, up from 77.8 million in the year ago quarter. Notably, most of the growth came from smaller companies.

"Larger companies have certainly drawn attention to the worldwide wearables market, yet it is the smaller companies fueling growth," said Ramon T. Llamas, research director for IDC's Wearables Team. "Rather than compete head-to-head with products similar to the market leaders, these smaller companies have instead focused on specific markets and thrived with different solutions. For example, BoAt, the number five company on our list, has succeeded by concentrating only on the Indian market, and was rewarded with triple-digit growth. Another example comes from Oura, whose fitness-tracking ring caught the attention of major sports teams and consumers. These and many other companies contributed to the Others category, which posted 55.5% year-over-year growth."

"Not only is the market being fueled by smaller brands, but newer form factors are also starting to gain some traction," said Jitesh Ubrani, research manager for IDC Mobile Device Trackers. "Wearable patches, rings, and even audio glasses are starting to differentiate themselves from the typical watches, bands, and headphones by offering tech that is hidden yet functional. Audio glasses from the likes of Bose, Amazon, Razer, and others are also going a step further by allowing consumers to be more comfortable with being always connected and are working towards consumer acceptance of AR glasses further down the line." 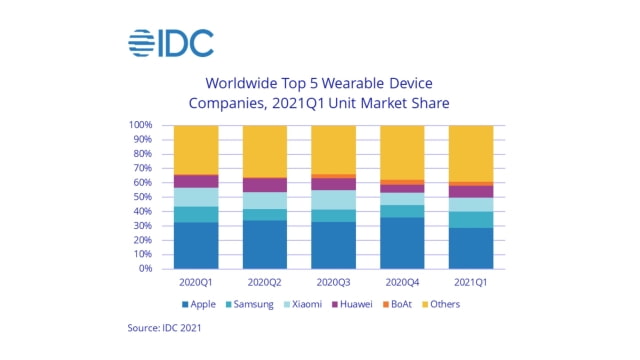 1Q21 Company Highlights
● Apple started 2021 the same way it ended 2020: as the clear leader in the worldwide wearables market. Appetite for its smartwatches remained strong with the less expensive SE and Series 3 gaining further traction in the market while its earwear – inclusive of AirPods and Beats – showed sequential declines after reaching record levels in 4Q20.

● Samsung moved ahead of Xiaomi for the first time in 1Q21 and by more than a million units. Driving its volumes higher has been its truly wireless earbuds, including the Galaxy Buds Live, Galaxy Buds+, and the most recent addition, the Galaxy Buds Pro. Also contributing to the company's growth were earwear shipments from its JBL subsidiary with its mass-market and less expensive models. Meanwhile, the company's smartwatches and wristbands sustained their growth, reaching new first quarter records.

● Xiaomi was the only company among the top five to post a year-on-year decline. Even as its earwear and watches posted strong growth from a year ago, declining wristband volumes, which accounted for more than half of its total 1Q21 volume, offset those gains. Xiaomi also faces the challenge of seeing very little of its total volume arriving outside of China, further limiting its growth opportunities.

● Huawei was the only company to beat its 4Q20 shipment volumes and without any presence in North America. Instead, Huawei relied primarily on the Chinese market, but also saw continued improvement across Europe while maintaining its presence across Asia and Latin America. The company's diverse portfolio encompassing watches, earwear, and wristbands all saw strong results, and the addition of glasses took a major step forward in China.

● India-based BoAt stayed far enough ahead of Fitbit and Huami to retain its fifth-place position. Its focus on earwear has been well received, and likewise its $19 average selling price – the lowest among the leading companies – have kept them in reach of many customers.