The iPhone 13's depreciation rate is half that of the Google Pixel 6, according to a new report from SellCell.

Apple’s iPhone 13 enjoys continued buoyancy in terms of valuation, recovering yet more of its initial depreciation in months two and three. At an average of 21.8%, this is still the most successful launch an iPhone has seen and represents tremendously low depreciation across the entire smartphone industry. Google’s Pixel 6 has not fared so well in its first month. Across all five Pixel 6 models, the range has lost an average of 42.6% in value. This compares to a 24.9% average depreciation value in the iPhone 13’s first month, a difference of 17.7%.

Additional Highlights:
● On average, we saw iPhone depreciation slowing between months one and two; the iPhone 13 lost on average 0.6% of its value. Could the Pixel 6 see a similar uptick in value?
● During months two and three, the depreciation value of the iPhone 13 didn’t increase at all, in fact it decreased from 25.5% in month two, to 21.8% in month three, a recovery of 3.7%, meaning the iPhone 13’s value went up, not down.
● The cheapest of Google’s new handsets, the Pixel 6 128 GB, lost the least value of all Google’s new handset range, with only 36.6% depreciation. By comparison, the least expensive iPhone 13 Mini 128 GB lost 26.9%.
● Every iPhone 13 model has seen a recovery in value compared to the initial depreciation at launch, and all iPhone 13 models are now worth more than they were 2 months ago. 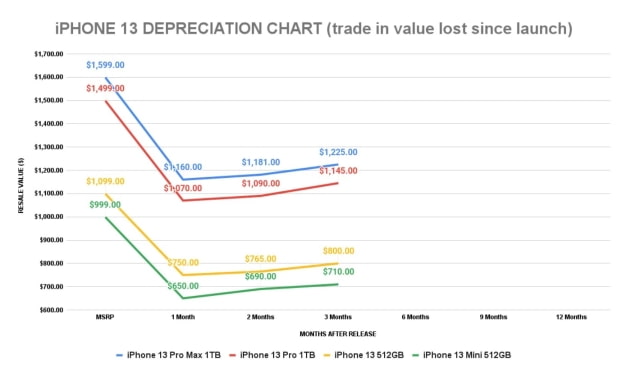 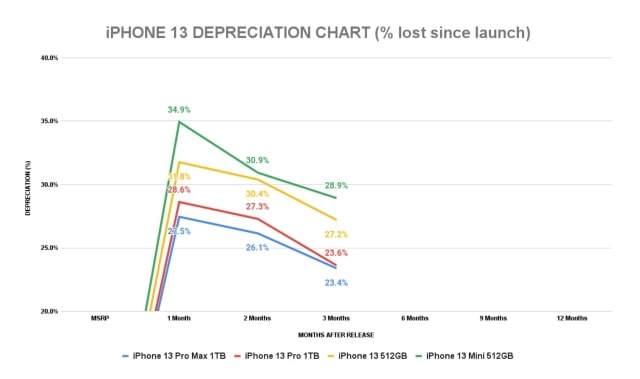