Apple has released a new version of iTunes that adds support for iOS 4 which will be released alongside the new iPhone.

For information on the security content of this update, please visit: http://support.apple.com/kb/HT1222

You can download the new version by selecting Software Update from the Apple menu at the top left of your screen. 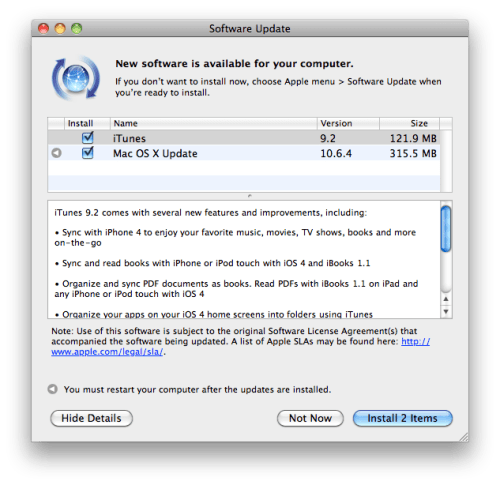 74tz - June 16, 2010 at 8:33pm
How does this, if at all, affect the jailbreak\'ability of iPhone 3GS on 3.1.2 (Both those models which require \'Spirit\' to achieve an untethered jailbreak AND those which don\'t [early production 3GS handsets])? I\'ve got an early production 3GS which is jailbroken on 3.1.2 using RedSn0w & iTunes v9.0.3 . Is it safe for me and others alike to upgrade to iTunes v9.2? Also how does, if by any means, the recent Mac OS X 10.6.4 update affect software currently used by the iDevice jailbreaking community such as RedSn0w & PwnageTool? Thanks, ~74tz
Reply · Like · Mark as Spam