This year, Zuckerberg, 26, added $4.9 billion to his fortune–vaulting to #35 on the Forbes 400 with an estimated fortune of $6.9 billion. Why the jump? Recent private equity investments in Facebook valued the firm at around $23 billion–more than triple its 2009 value of $7 billion. Illiquid private shares in secondary markets point to an even richer valuation.

Steve Jobs ranks #42 on the list with a net worth of $6.1 billion; $1 billion higher than last year. 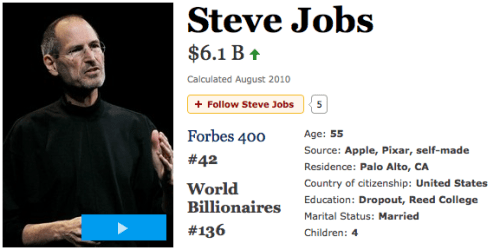 Rockey - September 30, 2010 at 12:54pm
Apple is a revolutionary, innovative company. Not a place for teens and losers. I\'m not surprised that Mark \"has\" more money. And quite frankly, I don\'t think Steve gives a F#@k about it. Long after they\'re gone, Steve would be known as a legend. And Mark would be known as a \"genius\" dropout punk who\'s business scheme happened to work big time. \"Richer\" is not the write word for this article. FIX IT iClarified!!!
Reply · Like · Mark as Spam