Best Buy may have accidentally leaked the existence of the Nexus S, a new smartphone from Google that would be available on T-Mobile, according to Engadget.

Best Buy Mobile published a humble (if not incomplete) ad for the "Nexus S for T-Mobile," touting both its "pure Google" experience (i.e. vanilla Android) and holiday availability exclusively from Best Buy.

Gizmodo recently published a hands on description on the device from a source...

It's black and shiny, built with glossy plastic. Up close, though, it's "got this curve to it." While the screen, which our source thinks is the same 4-inch AMOLED affair from the Galaxy series, is flat, the front is "sort of concave" with hard edges. And the back is curved. The tapering makes it feel thinner than Galaxy S, though it might be about the same thickness. "It feels really similar to the Galaxy S in a lot ways." (Note: Our mockup is very approximate.)

The device is expected to be manufactured by Samsung which possibly explains the 'S'. The ad has since disappeared. 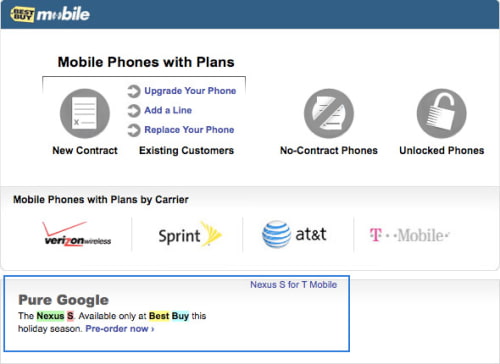