Apple may be planning to release a larger iPod touch or smaller iPad, according to Concord Securities analyst Ming-Chi Kuo.

AppleInsider reports, Kuo described a new iOS device that is undergoing evaluation for a potential release during the second half of 2011, with a screen size between that of the current iPad and the iPhone. Speaking of this new product, Kuo said he was "not sure" whether it would be "a 'Super iPhone' or a 'iPad mini.'"

Yesterday, SuperApple reported that two separate and well informed sources say Apple is working on device with screen size just under six inches. While SuperApple believed this device to be a smaller iPad, AppleInsider believes it will be a larger iPod touch.

With a 5 inch screen, a "big iPod touch" at its existing resolution would offer a 230ppi screen density; stretched across a 7 inch screen the same resolution would deliver 164ppi, still higher than the existing iPad's pixel density of 132ppi. Rather than trying to crush the full sized iPad's resolution into a smaller screen, something Apple's chief executive Steve Jobs quipped last fall would require filing down users' fingers, such a device could simply serve as an expansion of the iPod family, offering a larger view of the simpler iPod touch user interface.

Analyst Ming-Chi Kuo also predicted iPad 3 model would incorporate a 9.7 inch IPS panel with FFS (fringe-field switching) technology, which enables a wider viewing angle and clearer visual quality under in sunlight, and a doubling of the resolution to 2048x1536. 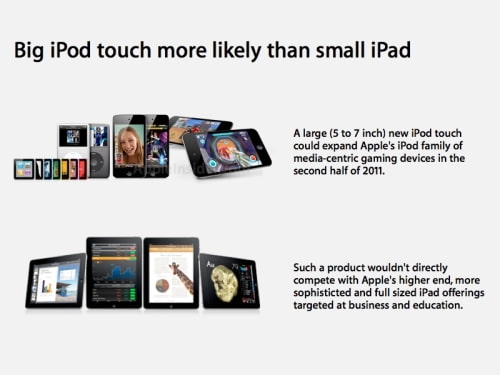 Creative_Distrupter - February 21, 2011 at 2:17am
My guess that it\'s neither a large iPod Touch nor mini-iPad. It\'ll probably be a \"new\" device geared at gaming, since Apple\'s app store has been a huge hit for the social-gaming platform. The device would compete directly against Sony\'s Xperia Play, while establishing a prescence in the 5-7 inch tablet category with the likes of Samsung Tab and Dell Streak. Effectively, the device would be targeted at two niche markets (gamers and ultra-portable/social device enthusiasts). Will have to see if my predictions are correct ;-) If my prediction is correct, it would be a brillant strategic-move by Apple, which would give it a competative advantage over Motorola, LG, Samsung, et al that are still working on their tablet devices. Apple would be ONE step ahead of its competitors again, sigh...
Reply · Like · Mark as Spam