The good news for anyone thinking of buying the iPad 2 is that it did incredibly well in the test, outperforming all the rivals we have in the building to compare with it. That includes the original iPad, which at first was nearly 4x slower to get through the test than the new version. The iPad 2 has a new, dual-core processor inside it which, at first glance, seems responsible for all of this extra speed.

There is another factor here, however: the version of the operating system the iPad is running. The iPad 2 we tested last night was running the latest version of iOS, 4.3, which changes the way it deals with JavaScript to speed things up considerably. This will be released to everyone with the old iPad, iPhone 4 and iPhone 3GS on 11 March, but we have a beta copy of the software now. Once we'd updated the software on our iPad 1, the gap between the two devices narrowed considerably, with the iPad 2 coming out at just 1.5x faster than the iPad 1.

This is good news for iPhone 4 and iPad 1 users who will notice a significant improvement in the javascript speed of their devices once iOS 4.3 is released. 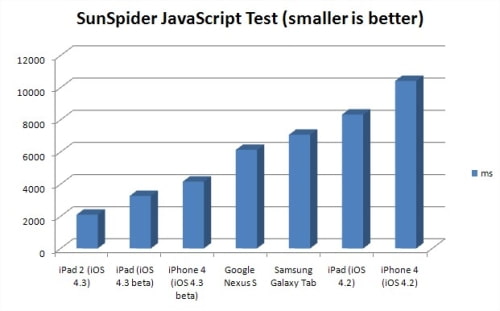 Dave Maiden - March 7, 2011 at 4:48am
The article should state this is only for web page browsing, not the complete OS, experience
Reply · Like · Mark as Spam

K.Epperson - March 7, 2011 at 9:59am
No need to say it is only for web page browsing, it clearly states this is a javascript test, no where else to use javascript other than the web.
Reply · Like · Mark as Spam

turim - March 7, 2011 at 3:16am
I´d say this is good news, and I think all devs in general should optimize their coding, which all end-users will benefit from. Snap snap snap! ;-)
Reply · Like · Mark as Spam
Recent