Apple has reportedly leased a 5,000 square foot space to open a temporary retail store during the South by Southwest Interactive Conference in Austin, Texas.

The location will open tomorrow in time for the launch of the iPad 2, according to Statesman.com.

On Wednesday, construction workers were busy retrofitting the 5,000-square-foot space in the building, at Congress and West Sixth Street, that Apple will lease for two weeks. Black vinyl sheeting covered the windows fronting Congress.

Rance Wilemon, a partner in Plat.Form Real Estate, has been trying to land an Apple store in the Second Street District since his firm took over leasing for that area last summer.

"They came in town on Monday, did a quick tour, found a spot, and they're in there working and will open by Friday," Wilemon said. "We would have loved to have had them" in the Second Street District. "They're just a great draw."

Wilemon said the Apple store on Congress "is not as much to test the market as much as it is to be a part" of SXSW. There's a huge opportunity to get brand recognition to a large audience during" SXSW. 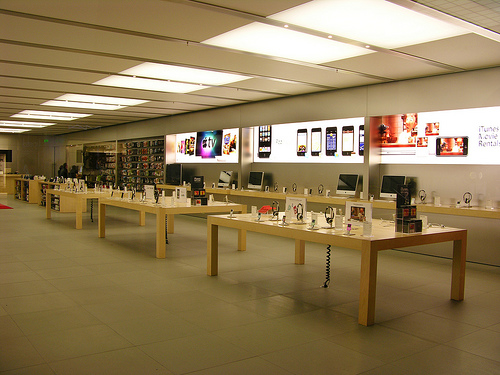