U.S. District Judge Phyllis Hamilton said she will 'probably' rule against Apple's motion to stop Amazon from using the words 'app store' to describe their app store, according to Bloomberg BusinessWeek.

U.S. District Judge Phyllis Hamilton said today after a hearing in Oakland, California, that she is "probably" going to deny the motion because Apple hasn’t demonstrated confusion among consumers. Hamilton said she will review court filings before issuing a final decision.

Apple’s difficulty demonstrating "real evidence of actual confusion" among consumers is a "stumbling block for Apple," Hamilton said. "I’m troubled by the showing that you’ve made so far, but that's where you’re likely not to prevail at this early juncture."

Apple has relentlessly pursued its attempt to register the words 'app store' despite having its application rejected multiple times and having oppositions filed by numerous sources including Microsoft, Amazon, HTC, Nokia, and Sony. 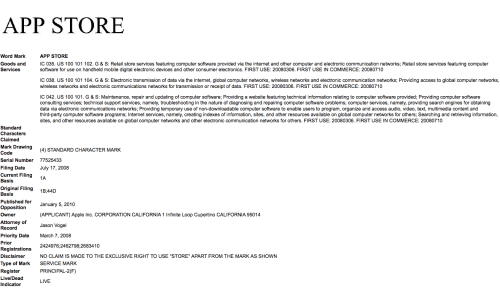