70% of the world is not being addressed by the current iPhone as it currently stands, according to Asymco's Horace Dediu.

Using data published by Deutsche Bank and the ITU, Dediu has determined that roughly 1.5 billion mobile subscribers are post-paid and 3.7 billion are pre-paid.

That means that nearly 70% of the world is not being addressed by the iPhone as it currently stands. Put another way, a shift in positioning might result in a 250% increase in addressable market. 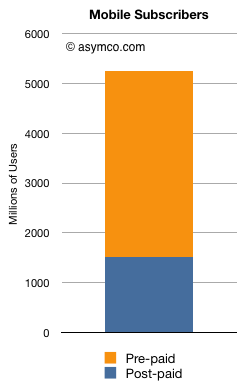 In countries such as the United States and Canada, Apple has reached nearly its entire addressable market since most subscribers are post paid. As you can see in the chart below, most other countries, especially in Asia, are primarily prepaid.

Dediu notes that $200 happens to be the important psychological price inflection point where volumes increase dramatically. He suggests that perhaps the iPhone's hardware is now getting good enough for Apple to let go of the frontier of what's technologically possible and consider expanding its reach as recent rumours have suggested. 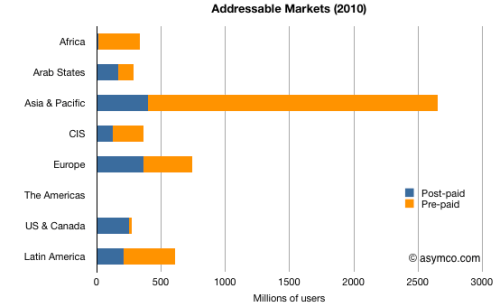