The Tampa Bay Buccaneers NFL team has replaced their playbook with iPad 2s, according to the St. Petersburg Times.

Rather than producing thick periodicals the size of the Yellow Pages, the Bucs have downloaded their playbooks on iPad 2s and distributed them to each of their 90 players.

What's more, players can use the tablet computer to reference video files of games, and practice and situational videos of any NFL team.

"It's crazy how much technology has changed the game," second-year safety Cody Grimm said. "Back in the day, I think probably the whole team had to sit down with a projector and a reel, and watch the film together. They'd have the whole offense in the same meeting room. Now we all have our own iPad. Stuff that we used to come in here to see, we can sit on our couch at home and have access to it 24-7. It's awesome."

Coach Raheem Morris had the idea to load the playbook on an iPad after using the device to watch footage of draft prospects with general manager Mark Dominik and player personnel director Dennis Hickey.

Morris said it took just two minutes for Bucs co-chairman Bryan Glazer to approve the purchase of 90 iPad 2s at a cost of between $500 and $600 each.

An added benefit of having the playbook on the iPad is that if a player loses the playbook, a remote wipe can be performed using Find My iPhone, says Morris. 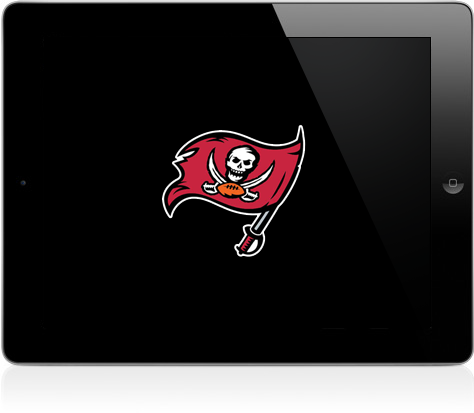 Jay - August 26, 2011 at 2:59am
"An added benefit of having the playbook on the iPad is that if a player loses the playbook, a remote wipe can be performed using Find My iPhone, says Morris." What?!? Remove wipe a playbook using Find My iPhone? I think you meant, an added benefit of having an IPAD over the PB, is the remote wipe. Sarcastic since BBs are known in their corp environment to be remotely wiped from the BES server.
Reply · Like · Mark as Spam

gabe - August 26, 2011 at 11:17am
they are not talking about black berry in this entire article - it is the team's play book (not the black berry device) that they are talking about (a binder that has all of their game statistics and game play sketched out) - not an electronic device.
Reply · Like · Mark as Spam
Recent