iFixIt has performed a teardown of the new Apple Thunderbolt Display.

Highlights:
● Interestingly enough, the Thunderbolt cable that routes into the display also plugs into a standard Thunderbolt socket on the logic board. Apple could have just soldered the cable wires to the board, but instead chose to implement a cover that prevents the cable from being detached from the logic board's Thunderbolt socket.
● How about 250 watts of maximum continuous power -- is that enough for you?
● The Thunderbolt Display comes with a 49 watt 2.1-speaker sound system, including a miniature subwoofer.

Thunderbolt Display Repairability Score: 8 out of 10 (10 is easiest to repair)
● Only T6 and T10 torx screws hold it together, meaning minimal tooling is required to service.
● Minimal use of adhesives means reassembly will be easier and cleaner.
● Front glass panel and LCD are easy to remove and major components are exposed upon removal.
● You have to use suction cups to remove the front glass, which could end poorly if not done properly.
● While disassembly was very straightforward, there are a lot of parts, cables and connectors, making full reassembly not for the faint of heart.

Hit the link below to see the full teardown. 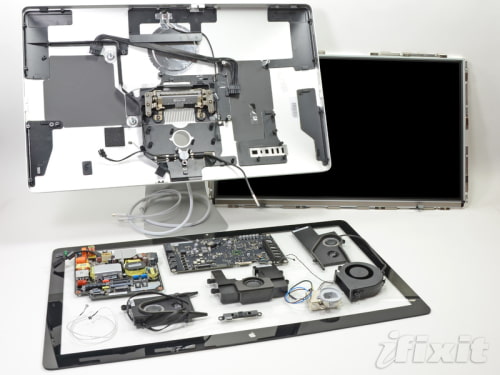 Inyourmouth - September 28, 2011 at 7:26pm
Well, they tear it apart, for YOUR convenience without voiding YOUR warranty! They are helping YOU out!
Reply · Like · Mark as Spam