AT&T is trying to get Apple to change the status bar icon for the iPhone 4S to show 4G instead of 3G, reports TIMN.

Confusingly, the company has been trying to brand its HSPA+ service as 4G despite being in the process of rolling out LTE.

Here's a bit of a shocker: the carrier is apparently "working with Apple" to change the indicator in the iPhone 4S (which tops out at 14.4Mbps, up from the iPhone 4′s 7.2Mbps) to show "4G" in the status bar as well.

AT&T has since confirmed the report saying they are "working together" on the matter and stressed that "customers will get 4G speeds from day one" regardless. 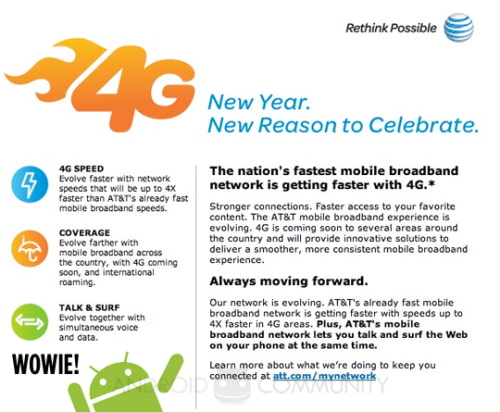 LTE - October 7, 2011 at 10:02pm
AT&T is a joke. They just want to \"sell\" that 4G BS thing because now, Sprint is also selling iPhones and they\'re worried that they will lose more customers. AT&T, try to fix your freakin\' drop calls first before you \"trick\" the consumers with your stupid tactics.
Reply · Like · Mark as Spam

Mike - October 7, 2011 at 9:28pm
Or it's possible they know that unlocking software is going to make the carriers lives miserable. "Let's get as many people in before the figure out what's going on." LOL
Reply · Like · Mark as Spam

yiyiopr - October 7, 2011 at 8:47pm
sounds like they are desperately trying to get a leg up on the competition now that Verizon and Sprint also carry the iphone. The 4G sign would give them the appearance of having the superior iphone while not having the superior iphone... To succeed via trickery, very honorable AT&T...
Reply · Like · Mark as Spam

Really!!! - October 7, 2011 at 9:06pm
Is it really trickery or just won't to show people that there is a speed increase (actually) double to the people that are clueless and complain that it's the same old speeds as the iPhone4. If everyone knew automatically then there would be no need but most people don't.
Reply · Like · Mark as Spam
3 More Comments
Recent