Apple has been awarded 13 design patents for the iPad 2 in China, reports Patently Apple.

The designs cover Apple's Black, White and 3G iPad 2 models in a series of both photographic and illustrative design styles. Apple has dramatically revved up their legal machinery in China this past year as the stream of granted design patents have dramatically risen. Just in September alone Apple was granted 40 design wins for iOS graphic elements, the MacBook Air and even their Shanghai Apple Store architecture. With Apple having accused Samsung of "slavishly- copying" its market-leading iPhone and iPad, every industrial design patent victory for iOS devices is another arrow in Apple's legal quiver.

The iPad 2 designs detailed in the patents are protected until July 2016. 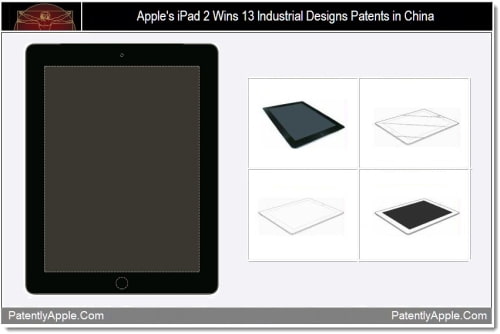 fj - November 6, 2011 at 8:27am
what a load of money making bullshit. patenting designs... im gonna patent my face and then sue you because your nose looks similar to mine. heck, do what apple do and sue their own familiies (figure of speech) over similarities.
Reply · Like · Mark as Spam

iOS 6 - November 17, 2013 at 4:03pm
What a load of shit to make a comeback like defending for a loser company, don't you especially have what it yakes to make a good product, show us your mister genius wannabe!
Reply · Like · Mark as Spam
Recent