Apple will reportedly open its Grand Central store next weekend, slightly later than originally expected; and it won't be sharing any revenue with the MTA, reports the New York Post.

According to the Post, Apple is the only retailer in the station to have such a great lease. The company is paying $60/sq ft which is well below what many other tenants are paying. For example, a Shake Shack burger joint will be paying more than $200/sq ft, according to obtained lease documents.

The MTA insists that it received a good price for the space saying, "We set out to maximize the rent we receive for this space, and we're thrilled that we were able to more than quadruple what we had been receiving previously," said MTA spokesman Aaron Donovan, who indicated that no other companies responded to its public request for proposal.

More notable than the cost per sq ft is the no-percentage deal. Typically tenants need to pay the MTA a percentage if they do over a certain amount in sales. In July, the MTA justified giving Apple the no-percentage deal by insisting that the store will "generate significant new traffic" for Grand Central Terminal's other 100 or so retail tenants.

Last week, Apple put up a total of 58 screens at the location to form a sign that reads, "Apple Store. Grand Central. Arriving Soon." 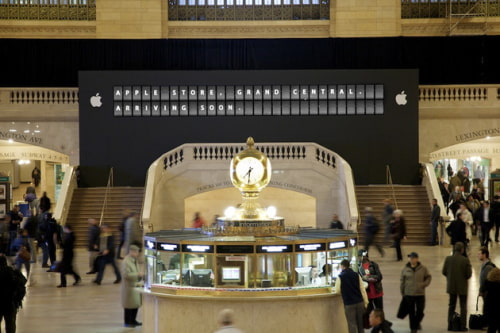