Google has responded to allegations by the WSJ that the company circumvented MobileSafari privacy settings to install tracking cookies.

-----
The Journal mischaracterizes what happened and why. We used known Safari functionality to provide features that signed-in Google users had enabled. It's important to stress that these advertising cookies do not collect personal information.

Unlike other major browsers, Apple's Safari browser blocks third-party cookies by default. However, Safari enables many web features for its users that rely on third parties and third-party cookies, such as "Like" buttons. Last year, we began using this functionality to enable features for signed-in Google users on Safari who had opted to see personalized ads and other content--such as the ability to "+1" things that interest them.

To enable these features, we created a temporary communication link between Safari browsers and Google's servers, so that we could ascertain whether Safari users were also signed into Google, and had opted for this type of personalization. But we designed this so that the information passing between the user's Safari browser and Google's servers was anonymous--effectively creating a barrier between their personal information and the web content they browse.

Users of Internet Explorer, Firefox and Chrome were not affected. Nor were users of any browser (including Safari) who have opted out of our interest-based advertising program using Google's Ads Preferences Manager.
----- 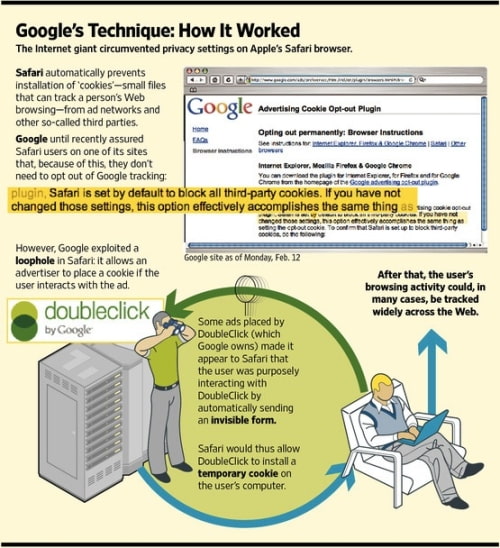 scamster - February 19, 2012 at 5:33am
fucking iClarified. Posted a comment in your app didn't fucking post. Used your lousy web app posting +1 and it puts only 1 Fucking useless!
Reply · Like · Mark as Spam