Facebook is working on a Messenger app for iPad as these leaked screenshots by 9to5Mac show.

A reliable source has provided an in-depth look at an early beta version of Facebook Messenger iPad, and those comfortable with the iPhone version should feel right at home with the new app. Facebook Messenger for iPad is basically a larger version of the iPhone application with one-to-one messaging, group chatting, push notifications, the ability to see friend locations on a map, and more.

Sources are unclear of when or even if Facebook plans to release this app but you can check out the screenshots below.

Notably, the site also says Facebook is working on an updated version of the iPhone app with Skype video chat support and improved performance. 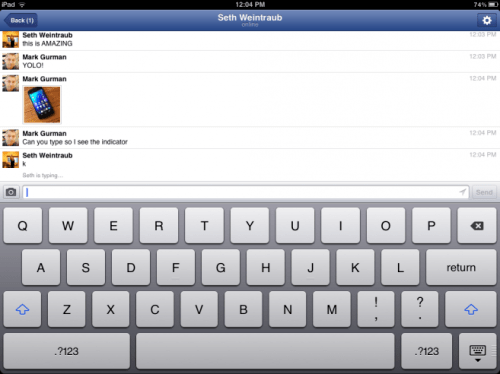 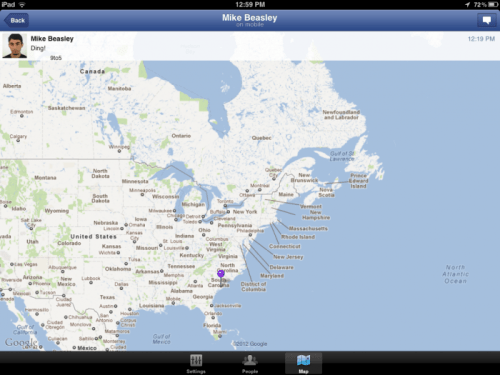 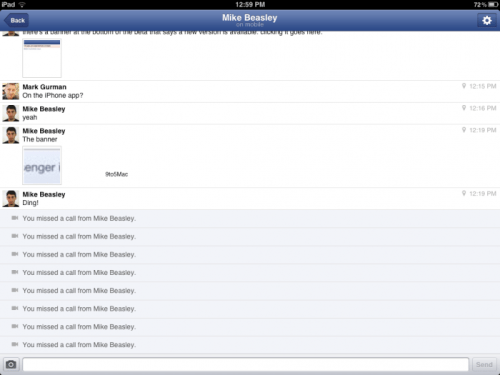 Ranmat - May 2, 2012 at 5:29am
This is just an iPhone app that's been stretched sideways. It needs to make use of the extra space with extra panes or something.
Reply · Like · Mark as Spam

Alejandro Ivan - May 2, 2012 at 1:49am
It's extremelly necessary. The actual Facebook app (the full app) is a crap. It's too laggy and full of bugs (and not it's SLOOOOOW, biographies take an eternity to load). Takes too long to access the messages.
Reply · Like · Mark as Spam

Eric - May 2, 2012 at 2:39am
i actually found it quite handy. there isnt much of a need but its still a good app if you are just using fb to chat people and not to browse.
Reply · Like · Mark as Spam