Amazon is planning to introduce a 10-inch tablet to take on the Apple iPad, claims DigiTimes.

The latest market rumors indicate that Amazon is likely to launch a 10.1-inch Kindle Fire in the third quarter, while tentatively suspending the launch of a speculated 8.9-inch model. Amazon apparently plans to simplify its product lineup to focus its competition against Apple's iPad, according to industry sources, who also added that the planned 8.9-inch model was originally to take on Samsung's Galaxy Note tablets.

Notably, Apple is rumored to be introducing a 7-inch tablet this year. 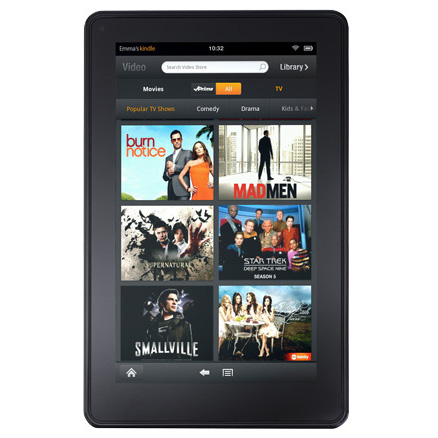 Acapulko - May 19, 2012 at 7:13pm
Really, u think Apple's that naive? Or is it u who's naive who doesn't understand the tablet market? Apple is a leader, they revolutionized this market. Amazon is a follower trying to cash in on the huge success of iPad. All the people I know who bought Kindle Fire say it can't take over iPad, it never could. Kindle Fire is a shitty product, and will stay like that even with a 10.1" version. If u say iPad is crappy, maybe you haven't used it yet. So stop trying to show that u know what ur talking about and go back in ur cage.
Reply · Like · Mark as Spam

NoGoodNick - May 18, 2012 at 7:08pm
Well at least someone is moving in the RIGHT direction (hint: it's NOT Apple!). This makes perfect sense. Sell a limited function device at a cheaper price to sell your 'media library'. Apple's decision to fracture its market doesn't, however. I don't see why they'd undercut their sales of a market leader with a cheaper/crappier product. At least call it the "iPod Xtreme" or something.
Reply · Like · Mark as Spam