Bullish Cross analyst Andy Zaky estimates that Apple's cash and marketable will reach $200 billion by the end of 2013, notes FORTUNE.

If Apple's earnings grow as he expects, the company's holdings -- currently at $110 billion -- will reach $205 billion by September 2013. That's more than the combined market caps of Intel (INTC), Hewlett Packard (HPQ), and Dell (DELL).

Zaky notes that by end of Q4 2013 Apple's cash per share will be nearly 40% of the stocks' current trading value. 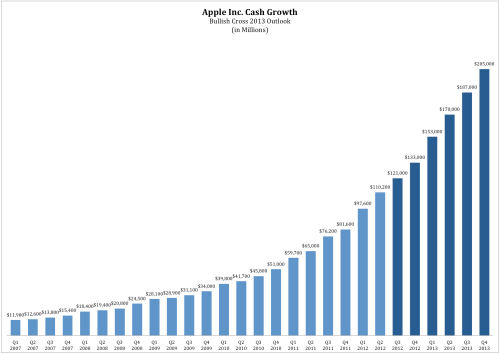 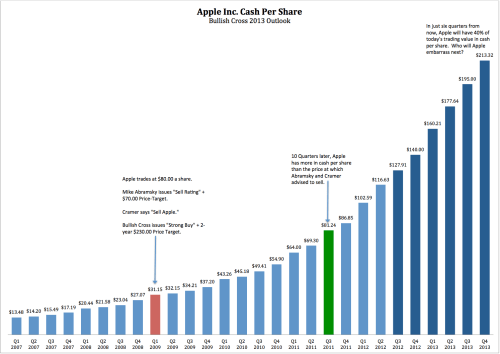 RIght - June 3, 2012 at 11:47pm
When you do the right things in life even God helps you achieve whatever you want. Thats what Apple is doing God is on their side..because they are a truly a genuine company that wants to succeed not trying to screw a consumer with their Products..Like DELL you buy their laptop works for 3-6 months everything is going down the hill Happened to me 3 times but I will never buy Dell or windows. All my 4 laptops been replaced with MACBOOK Pros and IMACS m done with this mutha fuckers..fuck windows and microsoft I hope Apple reaches 3 trillion dollars actually I hope they take one the USA all the companies will be out of business..
Reply · Like · Mark as Spam
Recent