The company replaced Google Maps with its own solution that does not have transit directions or street view, although it adds navigation and 3d flyover. The data being used is also significantly less accurate than that collected by Google over the past 10 years.

"Customers around the world are upgrading to iOS 6 with over 200 new features including Apple Maps, our first map service," spokeswoman Trudy Muller told AllThingsD. "We are excited to offer this service with innovative new features like Flyover and Siri integration, and free turn by turn navigation. We launched this new map service knowing that it is a major initiative and we are just getting started with it. We are continuously improving it, and as Maps is a cloud-based solution, the more people use it, the better it will get. We're also working with developers to integrate some of the amazing transit apps in the App Store into iOS Maps. We appreciate all of the customer feedback and are working hard to make the customer experience even better."

Earlier today it was reported that Google may have already submitted a Google Maps application to the App Store for approval. 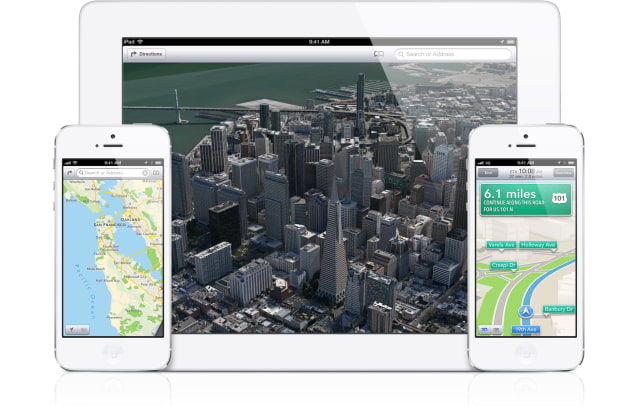 Ak - September 23, 2012 at 3:32pm
Personally I like the new maps. I own an iphone since the first one and I remember ios 1 with no multitask and mms. Look now how awsome ios is. I believe that many map updates will come and they will be much more better than the google's.
Reply · Like · Mark as Spam
1

Dean - September 22, 2012 at 9:44pm
I once remembered when people was making fun of the iPad when it first came out. Now every tablet that comes out is trying to be like an iPad. Don't knock apple map just yet. Time will tell!
Reply · Like · Mark as Spam
1