DisplayMate has released its report on the iPhone 5 display declaring it the 'best smartphone display we have seen to date'.

Based on our extensive Lab measurements the iPhone 5 has a true state-of-the-art accurate display – it's not perfect and there is plenty of room for improvements (and competitors) but it is the best Smartphone display we have seen to date based on extensive Lab measurements and viewing tests. In particular it is a significant improvement over the display in the iPhone 4 with much lower screen Reflections, much higher image contrast and screen readability in high ambient lighting (the highest we have ever measured), and a significantly improved and accurate Color Gamut and Factory Calibration that delivers very accurate colors and very good picture quality. While it's not quite as accurate as the new iPad, it is still probably more accurate than any consumer display you own (including your HDTV), unless you have a new iPad.

Notably, the Samsung Galaxy S III was found to have about half the brightness of the iPhone 5 due to its OLED display. Also, the Color Gamut is much larger than the Standard Color Gamut leading to distorted and exaggerated colors, and it is lopsided with green being more saturated than Red or Blue leading to a Green caste in many images. 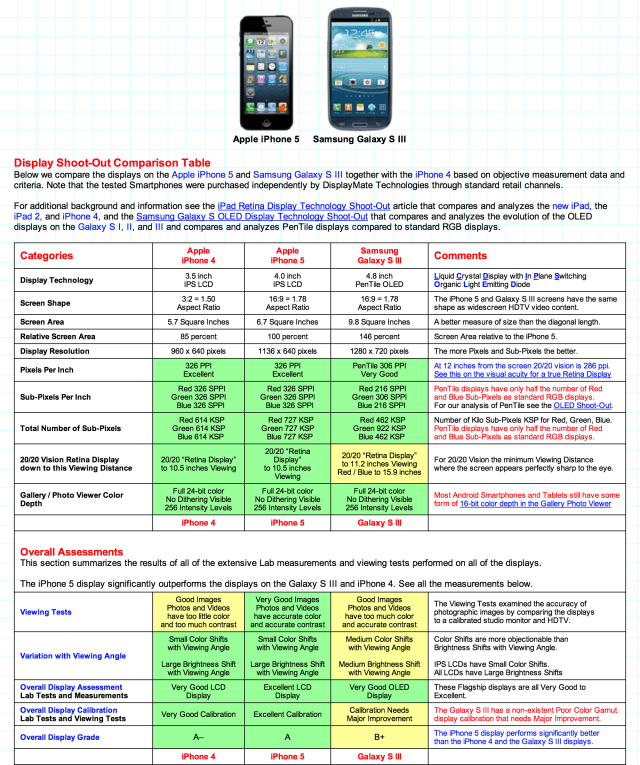 sharpknife - December 23, 2012 at 4:39pm
The galaxy's is the best phone I ever bouhght and nobody can say it is lie. and I m visited in each site and it said that almost in every way the galaxy's 3 is better than iphone
Reply · Like · Mark as Spam

Outdoor Lighting - September 29, 2012 at 8:51am
The Galaxy S3 is fantastic. I am just loving the experience of using it from the day i bought it. Same is true for http://www.absinthelights.com/lighting/outdoor-lighting as well, I redecorated my house using illuminaries from here and anyone sees it is quite impressed by the functionality. Your friends are going to envy you, just because this phone is so amazing!
Reply · Like · Mark as Spam

molanjames - October 16, 2012 at 2:11pm
I have them both i5 and S3 to test them out and compare them, and I must say Samsung is better for its larger screen and its quad core.Before choosing between them I must say check their current value at http://www.movaluate.com/
Reply · Like · Mark as Spam