The FCC has announced that it is examining the decision by the Library of Congress to make unlocking cell phones illegal.

Here is an official statement released by the FCC today on the issue.

-----
The following statement is attributable to FCC Chairman Julius Genachowski: “The Copyright Office of the Library of Congress recently reversed its longstanding position and stated it is a violation of the Digital Millennium Copyright Act for consumers to unlock new mobile phones, even those outside of contract periods, without their wireless providers’ permission, and that consumers are subject to criminal penalties if they do.

"From a communications policy perspective, this raises serious competition and innovation concerns, and for wireless consumers, it doesn't pass the common sense test. The FCC is examining this issue, looking into whether the agency, wireless providers, or others should take action to preserve consumers' ability to unlock their mobile phones. I also encourage Congress to take a close look and consider a legislative solution."
----- 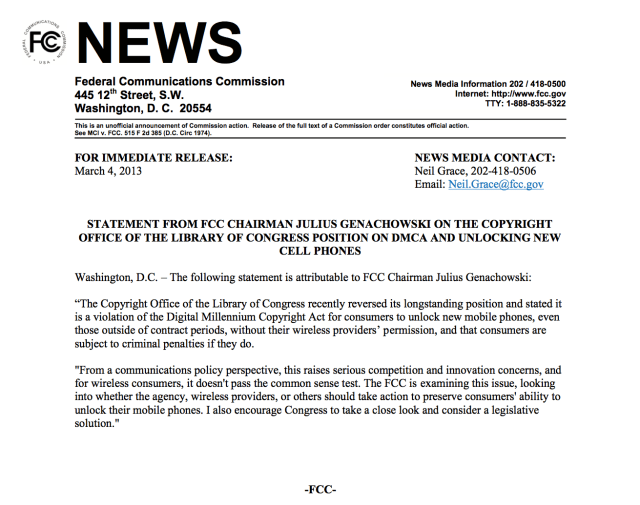 Euclides - April 6, 2013 at 1:53am
My favorite English app is pages beucase, you can make a really good newspaper and it helps me with my English beucase every time I can make a better newspaper.
Reply · Like · Mark as Spam

jose - March 4, 2013 at 7:26pm
so what they want us to do is own a phone and not be able to do what we want to it thats just not right for me if i owned a phone company if bought my phone product and got it unlocked i wouldnt care i got my money from you so its all good
Reply · Like · Mark as Spam
Recent