In today’s Business 24-7 article, it stated that a new iPhone would be due out in June. It also stated that the current iPhone 3G will be available in UAE on February 15, as we covered here

June does seem like a logical time for the next iPhone, since Apple usually releases a new iPhone every year.

The latest 3G model will become available on February 15 according to Dow Jones, and etisalat will be targeting private and business users. Both post-paid and prepaid subscribers will be able to use the product and voice, data and SMS services will be available. And the next version of the device, which is due out in June, will be launched in the UAE at the same time. 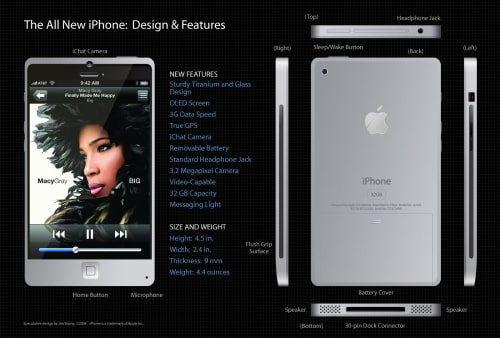 macfightclub - February 3, 2009 at 1:59pm
i really like it if i were apple i would start headhunting this person
Reply · Like · Mark as Spam
0

macfightclub - February 3, 2009 at 1:45pm
this is part of an iPhone contest but... iLike it not like it not this others just this special one http://www.ilounge.com/index.php/gallery/category/C87/
Reply · Like · Mark as Spam
0

saguerra - February 3, 2009 at 1:13pm
I believe the camera will be hidden on the center of the screen! i saw it a recent apple patent although the patent was registered for the laptops...
Reply · Like · Mark as Spam
4 More Comments
Recent