The Senate Permanent Subcommittee on Investigations has issued a statement today saying that Apple uses a complex web of offshore entities to avoid paying billions in taxes.

The full statement (which can be read below) accuses Apple of multiple tax avoidance strategies including the creation of two offshore companies that are incorporated in Ireland but are not tax residents of the country. One of the subsidiaries has allegedly paid no income taxes to any national tax authority for the past five years.

The subcommittee has also released a 40 page memorandum with findings and recommendations.

Earlier today, Apple posted its own testimony on the allegations which will be presented to the Senate's Permanent Subcommittee on Investigations tomorrow.

-----
Apple Inc. has used a complex web of offshore entities – including three foreign subsidiaries the company claims are not tax resident in any nation – to avoid paying billions of dollars in U.S. income taxes, a bipartisan investigation by the Senate Permanent Subcommittee on Investigations has found.

The subcommittee, which previously explored tax avoidance by other multinational corporations using offshore subsidiaries, found similar practices at Apple. In addition, the subcommittee review discovered an unusual tax scheme: Apple’s claim that two key offshore companies are not tax residents of Ireland, where they are incorporated, or of the United States, where Apple executives manage and control the companies. One of those Irish subsidiaries has paid no income taxes to any national tax authority for the past five years.

"Apple wasn’t satisfied with shifting its profits to a low-tax offshore tax haven," said Sen. Levin. "Apple sought the Holy Grail of tax avoidance. It has created offshore entities holding tens of billions of dollars, while claiming to be tax resident nowhere. We intend to highlight that gimmick and other Apple offshore tax avoidance tactics so that American working families who pay their share of taxes understand how offshore tax loopholes raise their tax burden, add to the federal deficit and ought to be closed."

"Apple claims to be the largest U.S. corporate taxpayer, but by sheer size and scale, it is also among America's largest tax avoiders,” said Sen. McCain. "A company that found remarkable success by harnessing American ingenuity and the opportunities afforded by the U.S. economy should not be shifting its profits overseas to avoid the payment of U.S. tax, purposefully depriving the American people of revenue. It is important to understand Apple’s byzantine tax structure so that we can effectively close the loopholes utilized by many U.S. multinational companies, particularly in this era of sequestration.”

Sen. McCain added: "I have long advocated for modernizing our broken and uncompetitive tax code, but that cannot and must not be an excuse for turning a blind eye to the highly questionable tax strategies that corporations like Apple use to avoid paying taxes in America. The proper place for the bulk of Apple’s creative energy ought to go into its innovative products and services, not in its tax department."

Tuesday’s hearing is the subcommittee’s second examining the tax-avoidance strategies of multinationals. A September 2012 hearing explored how Microsoft and Hewlett-Packard used dubious strategies to avoid billions in U.S. taxes. Similar practices at Apple include:

Using a so-called cost sharing agreement to transfer valuable intellectual property assets offshore and shift the resulting profits to a tax haven jurisdiction.
Taking advantage of weaknesses and loopholes in tax law and regulations to “disregard” offshore subsidiaries for tax purposes, shielding billions of dollars in income that could otherwise be taxable in the United States.
Negotiating a tax rate of less than 2 percent with the government of Ireland – significantly lower than that nation’s 12% statutory rate – and using Ireland as the base for its extensive network of offshore subsidiaries.

In addition to those standard multinational tactics, Apple established at the apex of its offshore network an offshore holding company that it says is not tax resident in any nation. That subsidiary, Apple Operations International, has no employees and no physical presence, but keeps its bank accounts and records in the United States and holds its board meetings in California. It was incorporated in Ireland in 1980, and is owned and controlled by the U.S. parent company, Apple Inc. Ireland asserts tax jurisdiction only over companies that are managed and controlled in Ireland, but the United States bases tax residency on where a company is incorporated. Exploiting the gap between the two nations’ tax laws, Apple Operations International has not filed an income tax return in either country, or any other country, for the past five years. From 2009 to 2012, it reported income totaling $30 billion.

A second Irish subsidiary claiming not to be a tax resident anywhere is Apple Sales International which, from 2009 to 2012, had sales revenue totaling $74 billion. The company appears to have paid taxes on only a tiny fraction of that income, resulting, for example, in an effective 2011 tax rate of only five hundreds of one percent. In addition to creating non-tax resident affiliates, Apple Inc. has utilized U.S. tax loopholes to avoid U.S. taxes on $44 billion in otherwise taxable offshore income over the past four years, or about $10 billion in tax avoidance per year. A third subsidiary, Apple Operations Europe, also has no tax residency, according to Apple. 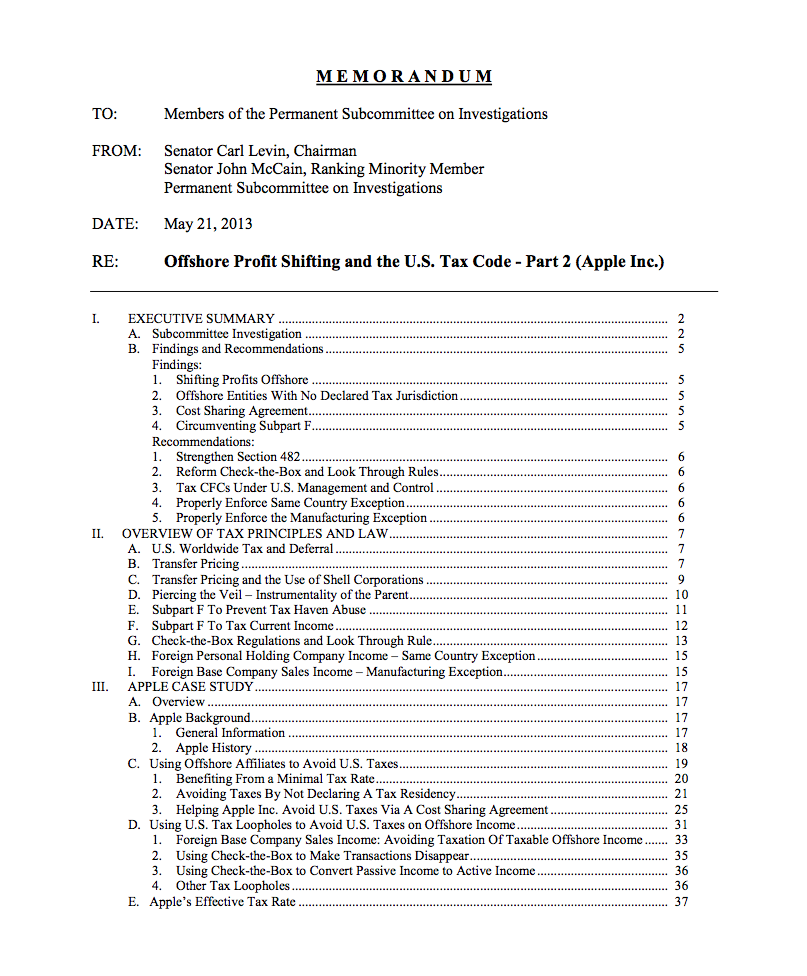 FukStupidGovernment - May 22, 2013 at 7:21am
This stupid gov. whines about Apple? Who should whine about our tax dollars being wasted on illegals? In case u didn't know, they just passed a law allowing illegals getting handouts. Thanks to Obummer.
Reply · Like · Mark as Spam

Kato - May 21, 2013 at 2:03pm
The government wrote the tax laws the companies use maybe they should look at refining those laws and closing some of the loopholes and also making better use of the tax they do collect from us that actually pay it
Reply · Like · Mark as Spam