Key Findings:
● 42% of Apple's U.S. customers between July 2012 and June 2013 were upgrading from another iPhone
● 43% of Samsung's customers had previously owned an Android phone, but not necessarily one made by Samsung
● Samsung drew more first-time smartphone buyers upgrading from so-called feature phones (37%) than Apple did (26%)
● Among buyers who switched brands, Apple took three times as many from Samsung (33%) as Samsung took from Apple (11%)
● Among switchers, Samsung drew more customers from HTC, Motorola (GOOG), and Nokia (NOK), while Apple drew more from Blackberry (BBRY) 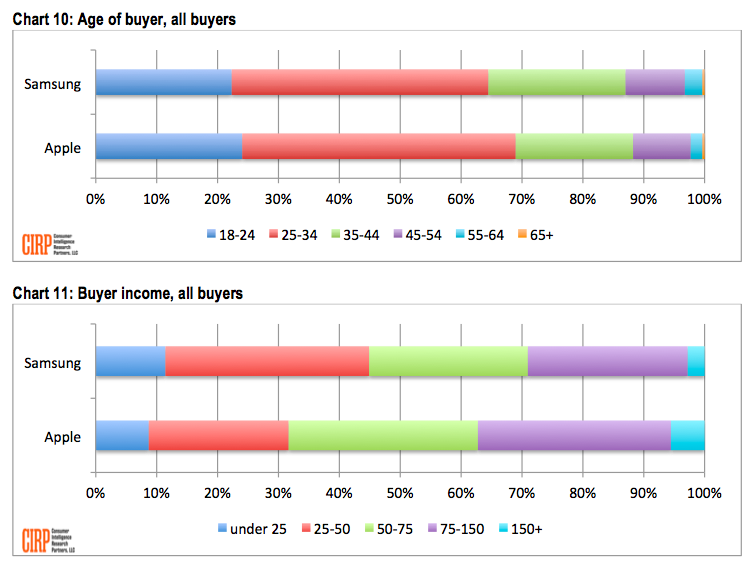 the 99 percent - August 21, 2013 at 2:39am
To all the bashers and trolls. There are other places you can hang out where you don't have to talk about Apple products. Why have I never heard of Android bashers? While PC haters are even in small groups, they don't spew venom. I pity the fool.-mr t. While I don't take bragging rights over miserable people, I do hope you get better. Now for the nerds and smart people. Google Android has been in the news very recently and about a year a go. So has Apple. The F.B.I. is frustrated with Apple and Apple will not comply (hippy freaks). While Google has bent over for the N.S.A. in hopes of contracts. Apple said fukc you. The FBI can remotely activate the mouthpiece on any Android device. The can also intercept and unencrypted all IM, SMS, video chat with Goggles' blessing. They cannot crack the Apple Mac, iPhone or iPad. Not IMs. Not SMS. Not FaceTime. They have tried to go through legal means of obtain this but are not successful. So next time you have your dick in your hand think about who's watching.
Reply · Like · Mark as Spam

lizabeth - August 20, 2013 at 7:04pm
so all my friend who was using an android phone is now all switched to an iphone. so im guessing android needs to make a better aOS system.
Reply · Like · Mark as Spam

Steve jobs - August 20, 2013 at 6:08pm
This is the most ridiculous article I've read in awhile. MANY of the Apple users I see are usually ghetto looking or idiots that don't understand anything about technology. ever wonder why is it that almost anyone you ask that works for a mobile company using an android device?
Reply · Like · Mark as Spam
37 More Comments
Recent