Winocm, a hacker who alongside iH8sn0w and SquiffyPwn brought us the p0sixspwn jailbreak of iOS 6.1.3-6.1.5, has announced he's going to work for Apple.

I figured now is the right time to say this, I will be working at Apple starting later this year.

Winocm isn't the first one from the jailbreak community to make the move to Apple. Comex, the hacker behind the Spirit jailbreak and JailbreakMe 2.0, also took an internship at Apple.

At this point it's unclear what exactly winocm will be doing at the company and it's unlikely he will be able to reveal those details. 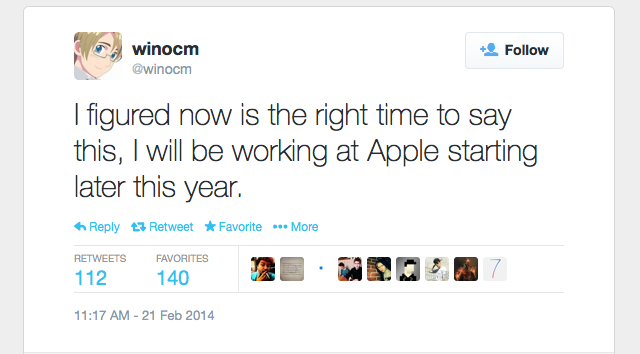 MUKAI - February 22, 2014 at 7:27am
You sold yourself. Now it's evident that this piece of shit programmer is gonna fix all holes or vulnerabilities Jailbreakers worked hard to exploit. Way to go cunt.
Reply · Like · Mark as Spam

K - February 22, 2014 at 6:17pm
We haven't even heard from him or iClarified yet about that crap, just because he is some jb hacker doesn't mean he can hack apple in order to do this.
Reply · Like · Mark as Spam
8 More Comments
Recent