Apple today introduced the new iPhone 3G S, the fastest, most powerful iPhone yet, packed with incredible new features including improved speed and performance—up to twice as fast as iPhone 3G—with longer battery life, a high-quality 3 megapixel autofocus camera, easy to use video recording and hands free voice control. iPhone 3G S includes the new iPhone OS 3.0, the world’s most advanced mobile operating system with over 100 new features such as Cut, Copy and Paste, MMS*, Spotlight Search, landscape keyboard and more. iPhone 3G S customers get access to more than 50,000 applications from Apple’s revolutionary App Store, the largest application store in the world where customers have already downloaded over one billion apps. iPhone 3G S offers twice the capacity for the same price with a 16GB model for just $199 and a new 32GB model for just $299. And beginning today, iPhone 3G is available at the breakthrough price of just $99 for the 8GB model—a huge milestone for the high end smartphone market.

“iPhone 3G S is the fastest, most powerful iPhone yet and we think people will love the incredible new features including autofocus camera, video recording and the freedom of voice control,” said Philip Schiller, Apple’s senior vice president of WorldWide Product Marketing. “And with a breakthrough price of $99, we are thrilled to get iPhone 3G into the hands of even more users who want them.”

iPhone 3G S offers incredible speed and performance, on average up to twice as fast as iPhone 3G, so you can render web pages quicker and launch applications faster. iPhone 3G S takes advantage of the OpenGL ES 2.0 standard for stunning high-quality 3D graphics, making mobile gaming and other graphic intense applications better than ever. iPhone 3G S is not only faster, but with longer battery life you can watch more videos, listen to more music, browse the Internet or keep using your favorite apps even longer. The new iPhone 3G S also supports 7.2 Mbps HSDPA for faster networking speeds.***

iPhone 3G S features a new 3 megapixel autofocus camera that takes amazing pictures and video, making it easier than ever to capture, edit and share those moments instantly with family and friends. The new autofocus camera adjusts focus, exposure, color and contrast for the best possible image and includes an automatic macro focus for extra close up shots. With the new “tap to focus” feature, you simply touch the display to select an object or area of interest and the camera automatically re-adjusts focus and exposure. You can record incredible high-quality video clips and edit them right on your iPhone 3G S by simply trimming the start and stop points. With iPhone 3G S you can send photos and video by email or MMS and post them to MobileMe™ or YouTube with just one tap. 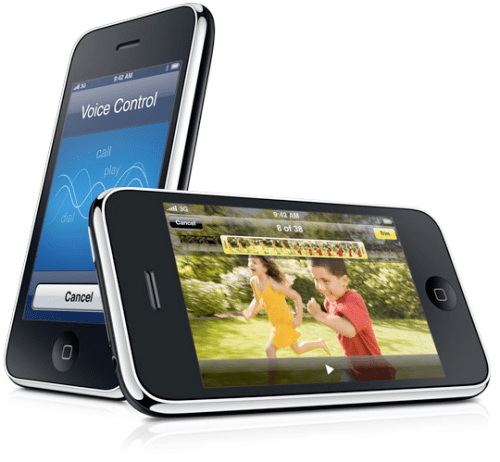 The voice control feature in iPhone 3G S offers hands free operation for both iPhone and iPod® functions. Simply speak the appropriate commands into the built-in microphone or headset microphone to dial by name or number. With voice control you can play your favorite music by artist, album or playlist and activate the Genius feature by saying “play more songs like this.” You can also tell iPhone to pause the music, play the next track, turn on shuffle or ask, “What’s playing right now?”

iPhone 3G S features a new built-in digital compass for instant navigation.**** The Compass app shows you which way you are headed and rotates as you change direction. You can orient yourself to true north or magnetic north, and iPhone’s built-in GPS automatically displays the coordinates of your current location. The new built-in digital compass is also integrated within Maps, so it automatically orients any map to the direction you are facing.

iPhone 3G S provides new accessibility features including VoiceOver, a screen reader that speaks what appears on the iPhone 3G S display, enabling visually impaired users to make calls, read email, browse web pages, play music and run applications. The new universal Zoom function magnifies the entire screen, and the White on Black feature reverses the colors on screen to provide higher contrast for people with low vision. iPhone 3G S also supports Mono Audio which combines left and right audio channels so that they can be heard in both earbuds for those with hearing loss in one ear.

iPhone 3G S includes the new iPhone OS 3.0 software with more than 100 new features including: Cut, Copy and Paste; MMS; Spotlight Search to search across iPhone or within Mail, Contacts, Calendar and iPod; landscape keyboard for Mail, Messages, Notes and Safari®; expanded parental controls for TV shows, movies and apps from the App Store; and the ability to capture and send audio recordings on the go with the new Voice Memo app. iPhone 3.0 software also includes a new Find My iPhone feature that works together with MobileMe so you can locate your lost iPhone on a map, send a message that will appear on the screen or play a sound to help you find it even if your phone is set to silent. If you cannot find your iPhone, you can erase all data and content on your iPhone with the new Remote Wipe feature. New iTunes® features available with iPhone 3.0 software include wirelessly downloading movies, TV and audio programs as well as iTunes U so students can download learning materials on the go.

iPhone 3G S gives users access to the revolutionary App Store, the largest application store in the world with more than 50,000 applications. The App Store allows developers to reach tens of millions of iPhone and iPod touch® users around the world. To date, customers have downloaded more than one billion apps from the App Store. And with more than 1,000 new APIs available with the iPhone SDK, developers can create even more innovative applications using In-App Purchases, a new Maps API and Push Notifications.

Pricing & Availability
iPhone 3G S will be available in the US on June 19 for a suggested retail price of $199 (US) for the 16GB model and just $299 (US) for the new 32GB model in both Apple and AT&T’s retail and online stores, Best Buy and Wal-Mart stores. iPhone 3G S requires a new two year contract with AT&T for qualifying customers. iPhone OS 3.0 software will be available on June 17 as a free software update via iTunes 8.2 or later for all iPhone customers. iPod touch customers will be able to purchase a software update for $9.95 (US). Beginning June 8, iPhone 3G will be available for just $99 (US) for the 8GB model. New MobileMe features for iPhone require iPhone OS 3.0. MobileMe is available for an annual subscription price of $99 (US).

iPhone 3G S will also be available in more than 80 countries in the coming weeks. For further information about US and international pricing and availability visit www.apple.com/iphone. 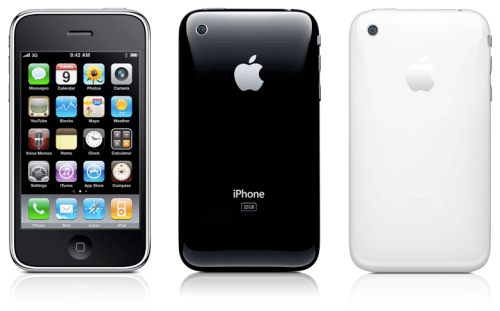 sublime740 - June 8, 2009 at 3:57pm
So AT&T is still the only carrier for the new and old Iphones at this time here in the US? When are they going to be available for other carriers here? Was that announced?
Reply · Like · Mark as Spam
0

Aaron - June 8, 2009 at 3:36pm
Okay, so we ARE in AMERICA right? Where AT&T is the only supported carrier. So why do we still have to wait till the end of summer to get MMS, this isnt a new technology! And goddamnit if I didnt just buy a new iPhone 3G last month! There should be a grace period that AT&T honors, 60 days. And if Apple Stores dont have demo phones anymore, why the hell would they get a new shipment of them in, you obviously know that theres going to be a new model.
Reply · Like · Mark as Spam
0

ricekake - June 9, 2009 at 2:10am
Yeah, no offense but this is the same time again that we will see a new iphone. Its been that way and considering all the rumors the last few months leading up to yesterdays Keynote speech..I really dont know anyone that would have bought an iphone in the last 2 months. But, I guess there always has to be the one and I guess its you. Smile.
Reply · Like · Mark as Spam
1 More Comment
Recent