Apple's iMessage now accounts for over 30% of all mobile spam messages, according to security and anti-spam company Cloudmark.

Speaking to Wired, Cloudmark employee Tom Landesman says that a year ago he had never seen an iMessage spam, now thanks to an aggressive campaign from a junk mailer, it accounts for 30% of mobile spam messages.

"It’s almost like a spammer’s dream. With four lines of code, using Apple scripts, you can tell your Mac machine to send message to whoever they want."

iMessage is particularly enticing to spammers because they can easily use a Mac to send messages. All they need is an email address and the recipient will likely get the message on their phones, computers, and tablets.

In addition, Apple's desktop client immediately tells you if a number or email you've entered is registered with iMessage. That lets spammers quickly generate lists of verified iMessage users. Furthermore, some users have iMessage set to automatically report whether a message has been read or not.

Landesman says that a year ago Apple didn't appear to limit the rate at which messages could be sent. Now rate-limiting has been added; however, it does little to stop spam because the spammers can just freely register more accounts.

Apparently, there is also a tedious way to report spammers. You have to email the company a screenshot of the spam, the phone number or email address of the spammer, and the date and time it was sent.

Hopefully, Apple takes some steps to make reporting spam easier and cut down on unsolicited messages. 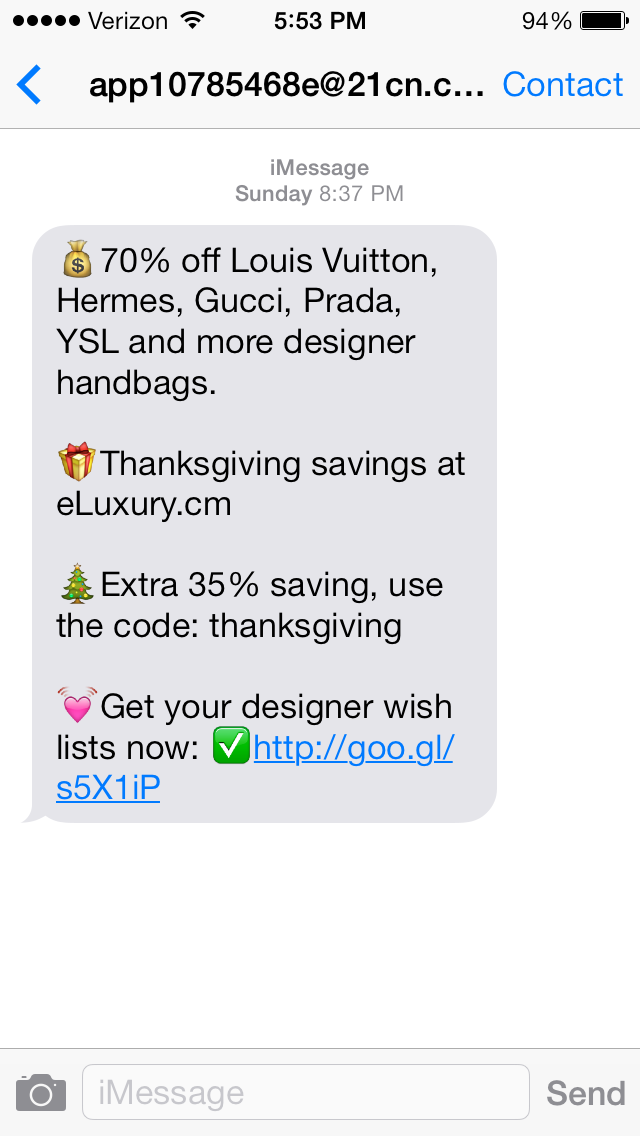 Jim Damop - August 21, 2014 at 9:14pm
Thats why modern security mechanisms for smartphones are needed. A new intrusion detection system based-on biometrics and behavior profiling was introduced in a Eurosec’14 conference. For more information refer to: The Best of Both Worlds. A Framework for the Synergistic Operation of Host and Cloud Anomaly-based IDS for Smartphones http://dl.acm.org/citation.cfm?id=2592797 or http://tinyurl.com/ncjjfyh
Reply · Like · Mark as Spam