The 18-karat version of the Apple Watch could cost around $1,200 when it is released in January, reports TechCrunch.

A jewelry contact familiar with the matter told TechCrunch that the gold, 18-karat version of the Apple Watch could cost around $1,200 retail when it launches in January. This has been corroborated, based on size and weight, by jewelers familiar with the material Apple is using to make its Apple Watch Edition pieces. It should be noted that this is an estimate and the piece could come in well below that price.

The pricing given to TechCrunch is based on making the watch out of solid gold alloy. Chad Rickicki, a watch expert, said that a case the size and shape of the Apple Watch in 18-karat gold would cost around $600 to make.

Apple hasn't reveal much about the pricing of the watch. It only said that the watch will start at $349. However, there are 34 models of the device, including the 'Edition' gold models, which will definitely cost more than that. 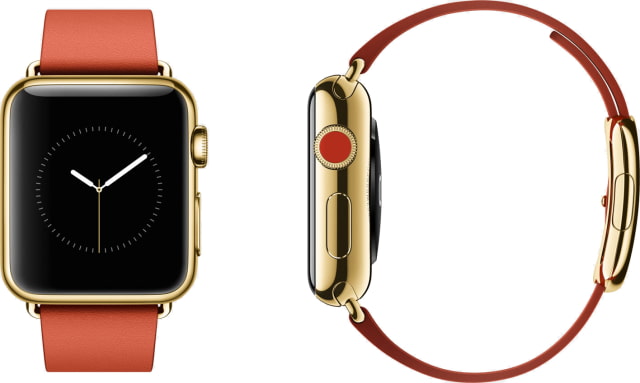 Yourmom - September 13, 2014 at 4:39pm
Why are you people so dumb. Obviously this gold model is for people that have a lot of money. Clearly 1000 is nothing for a rich person. They made one that's 350 for normal people. So calm down. This is obviously for the upper class so no reason to hate. I would rather have a quality $350 watch that actually works than a s watch or whatever it's called that's plastic and disgustingly ugly.
Reply · Like · Mark as Spam