Apple has announced that adoption of iOS 8 has reached 47%. That's just 1% higher than the company reported previously.

As measured by the App Store, iOS 8 adoption was at 46% on September 21, 2014. Apple has now updated that number to indicate that usage of its new operating system reached 47% on October 5th.

While the increase is minimal we expect to see those numbers climb steadily higher, especially with the increase in the new iPhone 6 and iPhone 6 Plus devices reaching consumers. Before the release of iOS 8, iOS 7 adoption was over 90%. 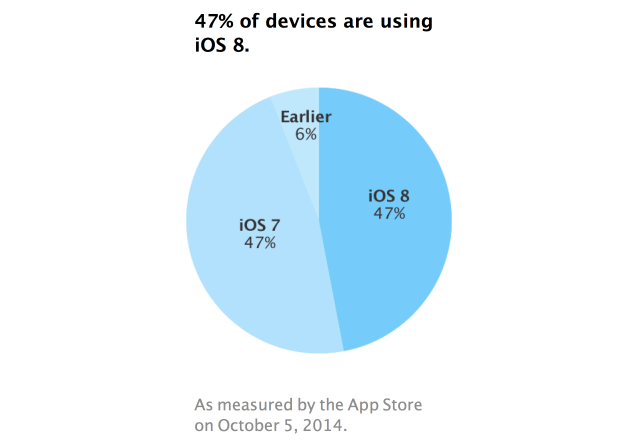 mrinal - October 8, 2014 at 11:00am
update ios 8.0.2. wifi is very slow on iPhone 5s.unable to use whatsapp imsg viber clash of clans etc.today morning i went to apple service center.they just restore the phone again.same problems is der.apple plx fix it.
Reply · Like · Mark as Spam

Ren - October 7, 2014 at 8:06pm
and you can't downgrade why or bothered to checking whatbchanged? That's what you get for assuming it's good without checking.
Reply · Like · Mark as Spam