Apple has announced that 90% of devices are now using iOS 7. The adoption level was measured by the App Store during a 7‑day period ending July 13, 2014.

Apple didn't break down adoption levels for various versions of iOS 7; however, it did say that 9% of users were on iOS 6 and 2% are on earlier software. 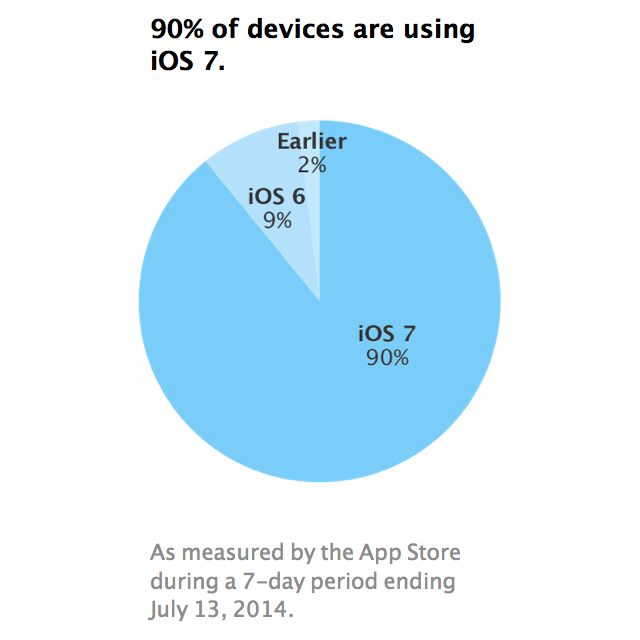 aapl - July 15, 2014 at 1:04pm
Let us users downgrade to any other previous iOS version and analyze that period of time! I'm sure it would be surprising.
Reply · Like · Mark as Spam

Nat - July 15, 2014 at 12:41pm
Beat that Spamdroid! Oh wait you still can't figure out the damn security, instead they buttfck the bibitches for jealousy. lol
Reply · Like · Mark as Spam

shar - July 15, 2014 at 11:12am
the title and the article should say 90% of those who used appstore during that period had updated to iOS7. it is bit misleading, and maybe that's the purpose. statistically, this number is useless, and it does not reflect on total iOS adaptation, because it is based on many indefinite variables, eg "certain 7 day period", it could be different on a different period (one can look and select a period with the highest yield) or "appstore usage", which only reflects a specific app usage. I think apple has access to better statistics, for example, the process with which devices check for OTA updates, it would tell apple how many of devices are running what iOS and yet they chose to narrow down the identification criteria to an specific app usage during a certain period. using a number that is very variable,it's probably just for show otherwise apple knows better.
Reply · Like · Mark as Spam
5 More Comments
Recent