Microsoft is reportedly preparing to announce the next version of Office for Mac 'very soon' and will likely release the new software in early 2015, reports ZDNet.

We recently reported on a leak that revealed what Microsoft has planned for the new software. Check out the leaked presentation here.

Microsoft's Ignite conference takes place in May 2015, it's thought that perhaps Ignite could be the launch event, with availability of the Office 16 client and server apps coming soon after.

ZDNet notes that, "Microsoft's Office team is simultaneously working on new Office versions for a variety of operating systems while continuing to update the core Office code base. The Office team is sharing more and more core code to help it better develop, update and maintain all the different versions of Office." 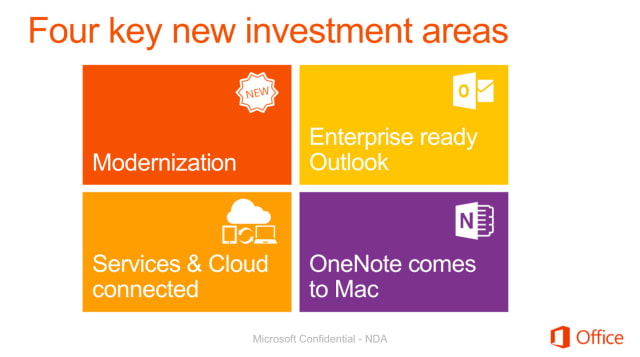 I said - October 29, 2014 at 6:56pm
Satya Nadella is doing an excellent job fixing the mess Balmer left behind. Now someone to replace Cook before he messed things up some more at Apple
Reply · Like · Mark as Spam
Recent