Total shipments were slightly above expectations of -4.8% growth, but the market still contracted both year on year and in comparison to the third quarter. Although the holiday quarter saw shipment volume inch above 80 million for the first time in 2014, the final quarter nonetheless marked the end of yet another difficult year – the third consecutive year with overall volumes declining. On an annual basis, 2014 shipments totaled 308.6 million units, down -2.1% from the prior year.

As in previous quarters, the U.S. market outperformed the global market.

"The U.S. PC market continued to grow in the fourth quarter, outperforming the global market for the tenth consecutive quarter. The past year was supported by Windows XP to 7 migrations in the commercial segment while consumer volume continued to decline," said Rajani Singh, Senior Research Analyst, Personal Computing. "Moving forward, the U.S. PC market should see flat to slightly positive growth. The U.S. consumer PC market will finally move to positive growth in 2015, strengthened by the slowdown in the tablet market, vendor and OEM efforts to rejuvenate the PC market, the launch of Window 10, and replacement of older PCs."

Vendor Highlights
● Lenovo continued to push hard in EMEA, expanding channels and capturing consumer holiday demand. The company also outpaced the market in the U.S. – though by a smaller margin – and was closer to market growth in other regions. Shipments reached a record 16 million units in 4Q14 with year-on-year growth of 4.9%, and annual shipments up over 10% from last year.

● HP also saw a tremendous quarter with 15.9 million units and year on year growth surpassing 15%. A particularly strong quarter in the U.S. was a key driver, along with some volume for public projects in Asia/Pacific and Africa.

● Acer grew over 3%, in part due to low volume a year ago but also from the success of its Chromebooks and entry-level notebooks. Acer's recovery in the U.S. and Europe slowed, in part due to higher year ago numbers.

● Apple kept the number 5 position on a worldwide basis, maintaining its lead over ASUS. The company's steady growth, along with recent price cuts and improved demand in mature markets, has helped it to consistently outgrow the market.

As you can see from the charts below, Apple is still the fifth largest PC vendor; however, it's getting closer to Acer. 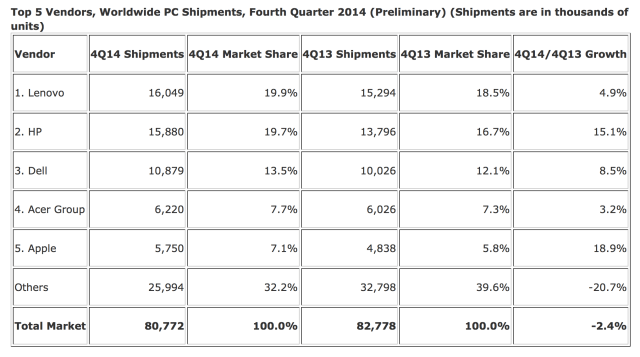 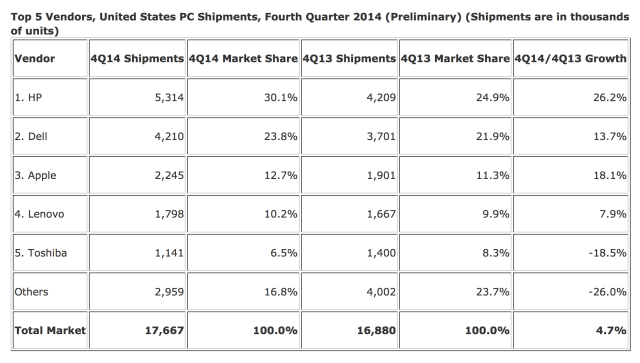 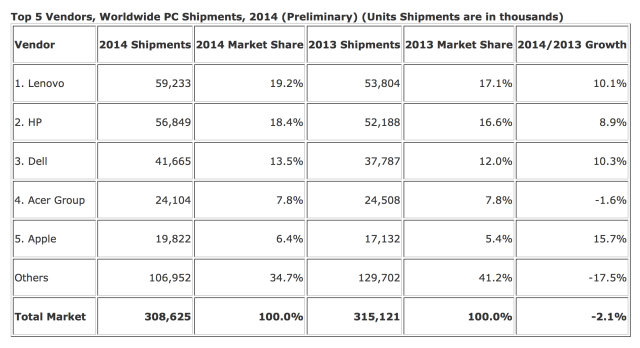 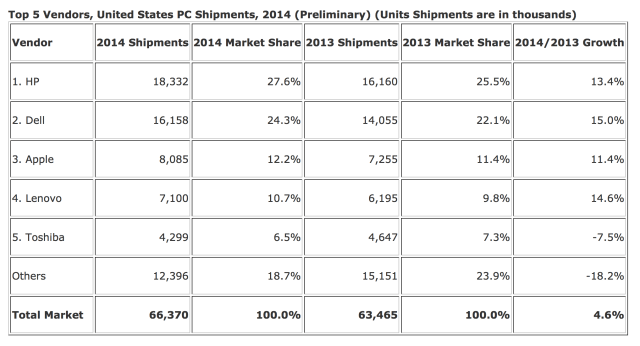