Amazon has announced new features for the Amazon Echo including voice control for iTunes, Spotify and Pandora. Amazon Echo is a Wi-Fi and Bluetooth speaker with a built-in personal assistant. You can learn more about it here.

The update was recently announced to customers...

---
We hope you're enjoying Echo. We're working hard to add many of the features you've asked for, and we would like to update you on two new features.

Voice control for Spotify, iTunes, and Pandora: You can now enjoy hands-free voice control for these popular music services. To get started, simply connect you phone or tablet to Echo by saying "Alexa, pair my device." After you start playing you music, you can easily control it by saying the wake word and: play, pause, stop, next, or previous.

Simon Says: You've likely heard some of Echo's jokes - now there's another way to have fun with Echo. You can get Echo to repeat whatever you have in mind by starting with "Alexa, Simon says..." Here's a fun tip: you can covertly use the remote control from another room to get Echo to repeat what you say and surprise your family.

In addition to these new features, we've made numerous improvements based on your feedback. We have increased response speed and accuracy for many of your questions, expanded coverage of facts from Wikipedia, and added new spelling words and definitions. The companion app is now available on iOS and Android 5.0+, and you can now use the app to bulk delete items from your to-do and shopping lists. And we are just getting started.
---

If you've got an Amazon Echo let us know what you think of the device and update in the comments below! 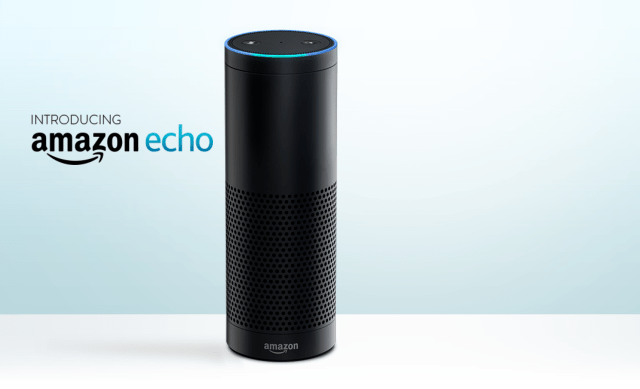 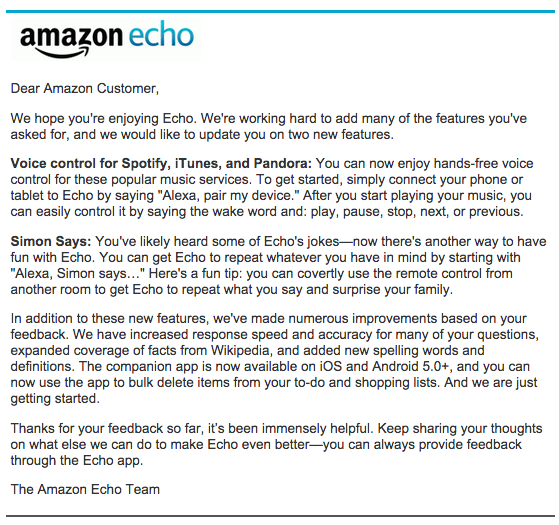 ricjh - February 3, 2015 at 7:16pm
The Echo is amazing. This is the first device in the smart communication (Smartcate) device category that actually works in the home as you casually move about. I expect the whole smartcate category will open up as other manufactures realize the gold that devices like this will bring.
Reply · Like · Mark as Spam