A teardown of the Apple Watch has revealed that it contains a plethysmograph rather than just a sensor which just measures heart rate, reports iFixit.

Apple's heart rate monitor is actually a plethysmograph—it looks and acts like a pulse oximeter, but Apple isn’t claiming it can measure your blood oxygen level. Why? Beats us.

Typically, healthy individuals at sea level have oxygen saturation values between 96% and 99%. If that dropped to 65% you would experience mental impairment and a level below 55% would likely cause a loss of consciousness.

It's unclear why Apple has yet to enable this functionality in the Apple Watch. FDA regulations may be an issue or the company may be planning to surprise with the feature in a software update. 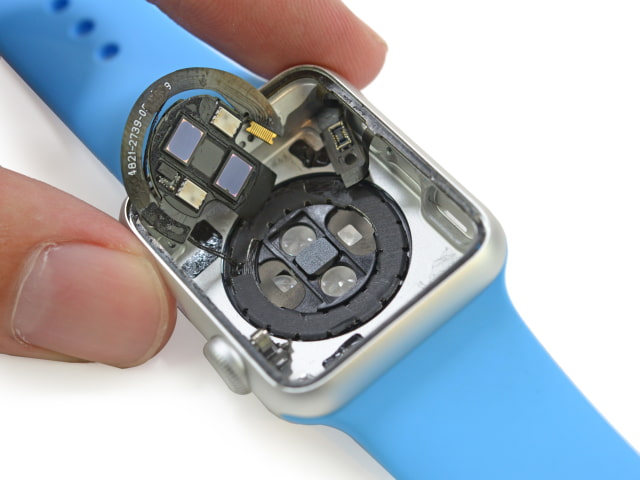 Lee - April 27, 2015 at 1:01am
The Withings Pulse was the same way. Measured pulse only at first then when they gotFDA approval they issued a firmware update that enabled the oximeter.
Reply · Like · Mark as Spam

Fadi Amawi - April 26, 2015 at 6:15pm
There is also important parameters can be measured but until now it's patent to Masimo Co. ( read more about rainbow technology ) it can measure hemoglobin level without taking sample of blood as well as carbon monoxide ( SPCO ) which is important in fire cases which regular pulse oximetry will show to you that oxygen level is 100% but actually it's carbon monoxide not oxygen which will kill patient
Reply · Like · Mark as Spam

NoGoodNick - April 27, 2015 at 4:00pm
Yes, Apple designed it to monitor these things, but they halted implementing them because they determined the results were not particularly good. The technology simply doesn't exist to RELIABLY test such things through the skin. It's a cute technology that's not yet ready for prime time. I too was looking forward to a continual blood glucose monitor, but it's just not to be.
Reply · Like · Mark as Spam

SayingWhatEveryonesThinking - April 26, 2015 at 3:31pm
The only reason I would start wearing a watch again would be to track blood sugar levels and other health monitors like this one. Make it work independent from the iPhone and a little thinner and I'm in. Otherwise wearing a watch sucks.
Reply · Like · Mark as Spam