Apple today announced a voluntary recall of AC wall plug adapters designed for use in Argentina, Australia, Brazil, Continental Europe, New Zealand and South Korea. In very rare cases, affected Apple two-prong wall plug adapters may break and create a risk of electrical shock if touched. These wall plug adapters shipped with Mac and certain iOS devices between 2003 and 2015 and were also included in the Apple World Travel Adapter Kit. Apple is aware of 12 incidents worldwide.

An affected wall plug adapter has 4 or 5 characters or no characters on the inside slot where it attaches to an Apple power adapter. Redesigned adapters have a 3-letter regional code in the slot (EUR, KOR, AUS, ARG or BRA).

You can visit the link below for details on how to begin the exchange process. 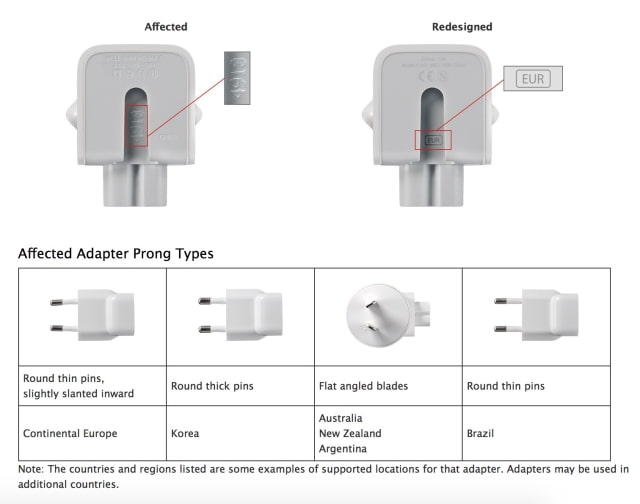 Europe - January 29, 2016 at 1:21pm
Who are Americans if not grand grand children of Europeans. The author of this text is ignorant. That's all.
Reply · Like · Mark as Spam

US - January 29, 2016 at 10:43am
Stupid bucked tooth Euro Trash. Tell your smartest people in your country to invent their own device, start with razors for your ladies pits!
Reply · Like · Mark as Spam