Watch out, PayPal: You have competition. Apple Pay will expand to the web on Monday, bringing its brand of mobile payments to select retail partners’ websites at WWDC 2016, Digital Trends has learned.

Apple Pay on the web would allow iOS users to make purchases with ease and could pose a thread for PayPal who currently dominates web payments. PayPal is used by more than 250 of the top 500 online retailers.

It's likely that Apple would announce the move to web during the WWDC keynote on Monday. We'll be providing coverage starting at 10am PT. Please follow iClarified on Twitter, Facebook, Google+, or RSS for updates. 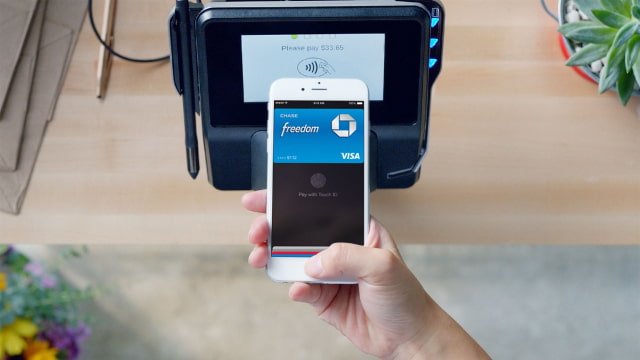 Your maama - June 13, 2016 at 3:11am
Paypal will charge high fees from you and your family. How on earth you thought paypal is right for you. Their verification bla bla why do they need our ssn, for what purpose. Paypal is not a bank and never will be. They have no right to ask for such info wheb you have already provided them to your bank.
Reply · Like · Mark as Spam

PhilipCohen - June 12, 2016 at 6:00pm
PayPal already has more serious on-line competition (outside of its mandated place on eBay) from MasterPass and Visa Checkout; Apple is delusional if they think that Apple Pay is going to make a mark in the on-line payments market as they only work through the credit card system anyway and cost the banks a fee; nevertheless ... Notwithstanding the otherwise constant stream of disingenuous and delusional nonsense that flows from eBay/PayPal, the share price history of these two clunky operators demonstrates the reality: Aug 2007: (pre John Donahoe) EBAY ~$40; AMZN ~$40; Jul 2015 (pre eBay-PayPal split): EBAY ~$66; AMZN ~$480; Jul 2015 (post-split): EBAY ~$28; PYPL ~$37; AMZN ~$530; Currently: EBAY ~$24; PYPL ~$38; AMZN ~$725—LOL ... PayPal is standing still, and eBay has for years been effectively going backwards—at a steady rate of knots. Notwithstanding the "spin-off" of PayPal from eBay, eBay and "PreyPal" remain effectively joined at the hip—for at least the next five years—and anyone that thinks otherwise is simply uninformed; and, thanks to a continuation of most of the destructive policies introduced over the eight year reign (2007–2015) of the "Pain from Bain", John Joseph Donahoe II, the eBay marketplace is continuing on its slow journey down the toilet; nevertheless, during Johnny Ho's occupation of the eBay corner office, this cretin and his gang of hand-picked Keystone Kops still managed to obtain for themselves massive, unearned, "performance" bonuses—while the company's "long" shareholders received not one penny. PayPal is a clunky, non-bank-licensed, non-deposit-insured, virtually non-regulated, "pretend" bank; a higher fee-charging payments intermediary that, in the main, rides on the back of the world's banks' existing payments systems, with no formal agreement with those banks other than PayPal's operating of a credit card merchant account facility with, and the making of direct debits/credits on some users' bank accounts via, one of those real banks. PayPal is, in its own words, "a merchant of sorts"; it is not a licensed "bank"; virtually everything that "PreyPal" does is done via "marketing" arrangements with licensed financial institutions—for example, look for the identity of the actual credit provider (in the micro print) on their credit providing instruments. Merchants' funds received via "PreyPal" are at risk of being subjected to lengthy arbitrary holds; funds left "on deposit" with PayPal are not FDIC deposit-insured. Even more perilous (for PayPal's shareholders), the great majority of PayPal's business originates from its (still) effectively mandated place on the eBay marketplace, so it logically follows that—with the destructive Johnny Ho-Ho-Ho now sitting at the head of the PayPal boardroom table—"PreyPal" will undoubtedly be accompanying eBay on its journey to the sewage farm. The reality is, PayPal's parasitic, higher fee-charging payments operation has little long-term future—outside of its mandated place on the atrophying eBay marketplace—now that professional online/mobile payments offerings from MasterCard ("MasterPass") and Visa ("Visa Checkout") are available to any online merchant that has (or can obtain) a credit card merchant account with a real bank. With respect particularly to "mobile" payments, notwithstanding Apple Pay's disappointing initial showing, methinks Apple Pay, Samsung Pay, Android Pay, "MasterPass", and "Visa Checkout", that is, those entities that have formal relationships with the world's retail banks and MasterCard/Visa, will soon enough bury PayPal's parasitic operation. PayPal users should never give PayPal an authority to direct debit their bank accounts; PayPal should only ever be given access to funds via a real-bank credit card account; that way your credit card-issuing bank will be the final arbiter of any transaction dispute; further, by using PayPal you forego the usual statutory protections that apply to credit card transactions. Conversely, sellers should never accept payment via PayPal for goods that are going to be picked up by the buyer; PayPal offers sellers zero protection from scammers in such circumstances. In May 2015, PayPal was fined $10 million over its “Bill Me Later” service, in part for unfairly charging some customers deferred-interest fees. The company was also required to return $15 million to consumers who used the service, which is now called PayPal Credit. PayPal's one-time adoptive parent, eBay, is likely the most unscrupulous commercial entity operating on this planet; but, have no fear, eBay is an equal-opportunity fraudster; demonstrably, they will knowingly aid and abet the defrauding of buyers by unscrupulous eBay merchants who bid on their own auctions, and, conversely, of honest sellers by unscrupulous buyers—as long as there is a financial benefit in such fraud for eBay. And if anyone thinks that the clunky "PreyPal" is any more scrupulous than eBay—given their equally poor customer service and lack of any mediation of transaction disputes by human beings, which effectively results in a hard-wired bias towards buyers/payers that they now necessarily have to pander to—good luck to all you small online merchants who may get burned in the process. For a detailed analysis of the ugly reality of eBay’s demonstrable, calculated, facilitation of endemic shill bidding fraud on consumers on its auctions marketplace—Google "Shill Bidding on eBay: Case Study #5" Goodbye clunky PayPal—it's not been nice knowing you—Google "Retail Payments: The Reality"
Reply · Like · Mark as Spam

Nitemare - June 12, 2016 at 12:26am
No issues with PayPal. Great service. Will continue to use PayPal. Reminds me when Apple tried to take over Google maps. Not
Reply · Like · Mark as Spam