An in depth analysis of the iPhone 7's display by DisplayMate finds it a 'truly impressive top performing display' that matches or breaks smartphone display records in 8 categories.

DisplayMate says, "It is by far the best performing mobile LCD display that we have ever tested, and it breaks many display performance records."

Here are some of the display's cutting-edge state-of-the-art performance functions and features...

• The iPhone 7 has 2 Standard Color Gamuts, following in the footsteps of the innovative iPad Pro 9.7 that was introduced earlier in 2016. Most mobile displays only support a single Color Gamut, including all previous iPhones. The iPhone 7 has both the traditional smaller sRGB / Rec.709 Color Gamut that is used for producing most existing consumer content for digital cameras, TVs, the internet, and computers, including photos, videos, and movies, and the new wider DCI-P3 Color Gamut, which is 26 percent larger.

• The iPhone 7 has the same wide DCI-P3 Color Gamut as 4K UHD TVs, so it will be able to accurately display all of the new 4K TV and video content. Since the iPhone 7 has a Retina Display it doesn't need the 4K resolution because it already appears perfectly sharp at its normal viewing distances.

• The new wider DCI-P3 Color Gamut is really a big deal – it is what makes 4K UHD TVs deliver noticeably better color and picture quality than 2K Full HD TVs, which is why consumers are upgrading their TVs, and why they will want to upgrade their mobile devices up to DCI-P3.

• Only three manufacturers currently have the new wider DCI-P3 Color Gamut on their Smartphones or Tablets, so it is a major competitive advantage. Other manufacturers will need to play catch-up fast.

• When Automatic Brightness is turned On, the iPhone 7 produces up to an impressive 705 nits in High Ambient Light, where high Brightness is really needed – the Highest Peak Brightness for a Smartphone for any Average Picture Level APL, including Full Screen White.

• The wider Color Gamut and much brighter display significantly improve screen readability and usability in high ambient light, which along with battery running is one of the most important issues for consumers.

• The Absolute Color Accuracy of the iPhone 7 is Truly Impressive as shown in these Figures. It is the most color accurate display that we have ever measured. It is Visually Indistinguishable from Perfect, and is very likely considerably better than on any mobile display, monitor, TV or UHD TV that you have. So photos, videos, and online content and merchandise will appear correct and beautiful.

Hit the link below for the full report! 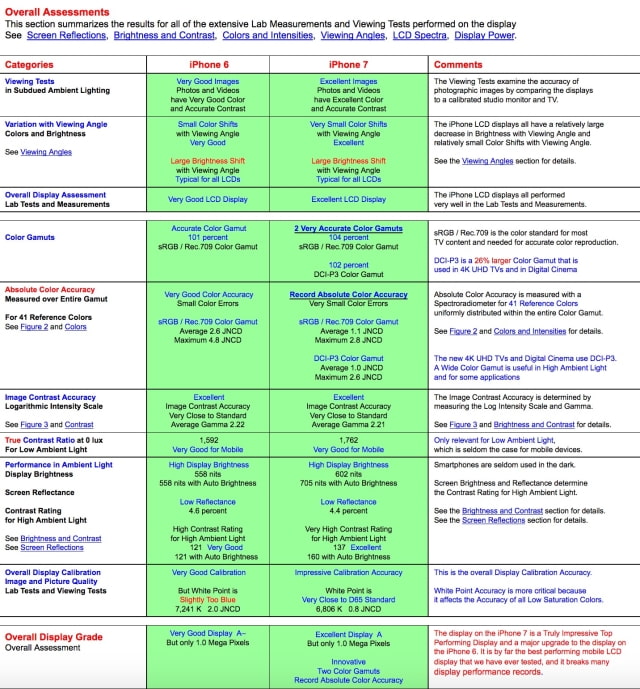 Jj - September 19, 2016 at 4:18pm
Either way, it proves that it doesn't need that much resolution to be great even by material standards! There's no excuse here you can say no matter what anyway!
Reply · Like · Mark as Spam
0