Apple MacBook shipments are up 17.1% quarter-on-quarter as global shipments for the second quarter of 2017 reached 39.96 million, an increase of 5.7% sequentially and 3.6% year-on-year.

TrendForce says biddings for notebook contracts in North America and market arrivals of new product models were the main driving forces behind the second-quarter shipments. There's some concern that strong shipments were the results of demand being pulled ahead so shipments in the second half of 2017 may be somewhat weaker.

“Nonetheless, the third-quarter notebook shipments are projected to increase by another 3% to 5% versus the prior quarter,” pointed out Kou-Han Tseng, TrendForce’s notebook analyst.

Here's a look at TrendForce's vendor highlights for the quarter...

● HP has retained first place in the shipment ranking for five consecutive quarters. In the second quarter, HP capitalized on getting contract bids for notebooks in North America and tapped into the demand related to back-to-school sales. HP widened its lead over second-place Lenovo by growing its shipments by 8.5% from the first quarter to reach a total of 9.35 million units.

● Lenovo shipped just 8.05 million units in the second quarter, representing a year-on-year drop of 2.4%. The notebook market was relatively much slower in the Asia-Pacific region, and this has an impact on the brand’s performance.

● Dell took third place in the global ranking with its second-quarter shipments increased by 21.3% compared with the first quarter and by 7.4% versus the same quarter a year ago. Successes in responding to North American tenders and growth in its Chromebook shipments allowed Dell to securely hold on to the third spot.

● ASUS’s strategy in the recent years has been about selling higher-priced premium notebooks rather than increasing shipments. Hence, the brand focuses on promoting high-end notebooks featuring displays with resolutions at FHD and higher. Currently, the shipment share of FHD and higher resolution notebooks for ASUS is above 40%, which is higher than HP’s and Lenovo’s. Owing to the releases of new products, ASUS’s notebook shipments for the second quarter grew 9.3% sequentially to 3.99 million units, allowing the brand to retain fourth place in the ranking.

● Apple trailed closely behind ASUS at fifth place in the second-quarter ranking. The updated 12-inch MacBook helped expanded MacBook shipments by 17.1% from the first quarter to 3.98 million units. TrendForce also anticipates a double-digit sequential growth for third-quarter MacBook shipments as Apple will focus on the MacBook Pro series during the year’s second half.

● While Acer continues to expand aggressively in the Chromebook market, it is facing a growing number of competitors. In the second quarters, new Chromebook models from U.S. brands took market shares away from Acer, causing its notebook shipments to drop by 3.5% from the first quarter to 3.22 million units. Acer remained sixth place in the global ranking.

Check out the chart below or hit the link for more details... 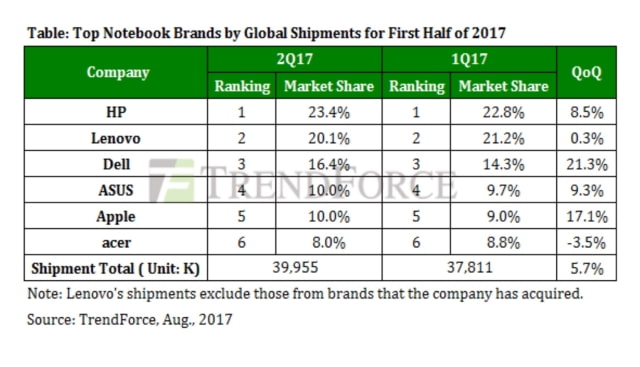