Verizon has announced that its unlimited plan is being split into three plans with more restrictions and throttling.

A new Go Unlimited plan costs $75/month with paper-free billing and AutoPay for a single line. Subscribers on this plan could be throttled at any time if the network is congested even at the beginning of a billing cycle. Video is throttled down to 480p on a smartphone and 720p on a tablet. There's no way to increase the resolution. Mobile hotspot speeds are capped at 600 kbps.

The new Beyond Unlimited is $85/month with paper-free billing and AutoPay for a single line. Subscribers could be throttled after exceeding 22GB in a billing cycle. If you sign a two year contract that limit is upped to 25GB. Video streaming is throttled down to 720p on a smartphone and 1080p on a tablet. There's no way to increase the resolution on either device. The plan gives you up to 15GB of LTE speeds when using mobile hotspot. Video streaming while tethered is also limited to 1080p. Subscribers of this plan get free calling, texting, and data in Mexico and Canada.

The Business Unlimited plan also limits you to DVD quality video streaming and offers 10GB of LTE mobile hotspot or 15GB on a 2-year contract.

Unfortunately, even users on Verizon's old unlimited plans will see their video streaming throttled. Soon 720p on a smartphone and 1080p on a tablet will be the maximum video quality you can get. There's no going higher even with a laptop and mobile hotspot.

Verizon says, “We're doing this to ensure all customers have a great experience on our network since there is no visible difference in quality on a smartphone or tablet when video is shown at higher resolutions (than 720p on phones and 1080p on tablets).” 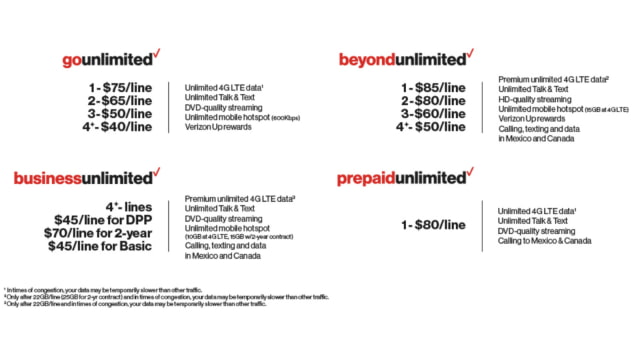 Just Sayin - August 23, 2017 at 6:41am
...if you sign a contract... WTF?? Now they're bringing back contracts? Man, T-mobile really did put a hurting on them. I read Vzw's internet speed had really slowed since they brought back unlimited data, so I guess this is there way of trying to limit usage so the slowdown is not so noticable.
Reply · Like · Mark as Spam

GinoP - August 23, 2017 at 1:29am
so much for old Verizon unlimited plan users who hanged on that thinking it's better than other plan.
Reply · Like · Mark as Spam