Apple's upcoming 6.1-inch LCD iPhone will lack some of the features found in the 5.8-inch and rumored 6.5-inch OLED iPhone, according to KGI Securities analyst Ming-Chi Kuo.

The LCD iPhone is expected to have the same notched design as the iPhone X as well as Face ID; however, to achieve a lower price it will use an aluminum frame instead of a stainless steel one. It will also have just a single-lens rear camera and drop 3D Touch.

The new LCD iPhone is expected to cost between $700 and $800 USD up from a previous estimate of $650-$750. It will purportedly be announced in September/October alongside the new 5.8-inch iPhone X and 6.5-inch iPhone X Plus. Kuo believes it could account for around 50% of new iPhone shipments. 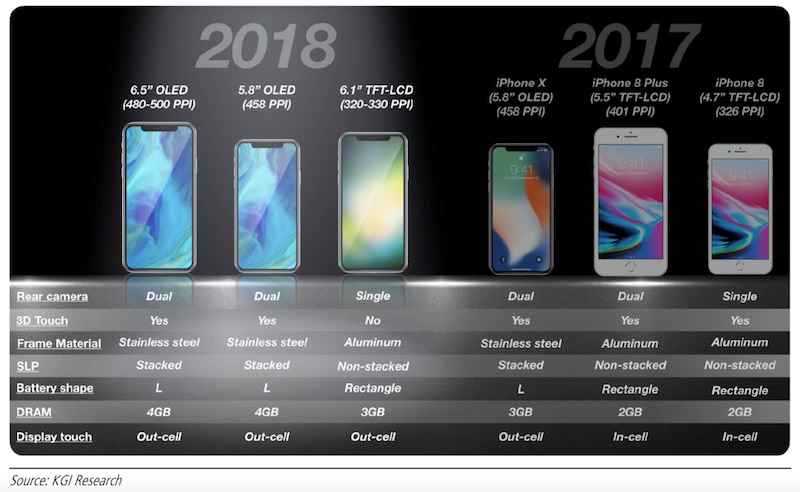 Raas al Ghul - January 23, 2018 at 11:52pm
Can you people read it’s meant to be an cheaper iPhone costing around $700 if they keep all the same features of the top model then what’s the point
Reply · Like · Mark as Spam

Yayaya - January 24, 2018 at 12:24am
No one wants to pay $1000.... matter of fact over $1000 lol. iPhones have been so affordable up until now. The company is falling apart. All of their current operating systems suck and they’re starting to charge us more. What are you defending? No hard worker will happily pay over $1000 for a phone that does nothing better than the 7 Plus or even the 8 Plus. Face ID. Great. Dual optical stabilization...great... stainless steal that he’s scratched easier than aluminum. Great.
Reply · Like · Mark as Spam

Raas al Ghul - January 24, 2018 at 2:46am
Are you done iPhones have never been “affordable” when the first iPhone came out it was around £369 whereas at that time average phones sold for about £70 in the market nowadays with thousand pound plus your phone is similar to what 400 pound was back then those people that want the best Pay the money no one is forcing you to buy Apple products
Reply · Like · Mark as Spam

Anon - January 23, 2018 at 11:28pm
So let's get this right? They're keeping the ugly unwanted notch at the top? Taking the decent camera away? Face ID the same which don't work right! And they're keeping the same ridiculous price tag of £1000? Which is why no one bought it? They really are loosing it, give the user what they want: edge to edge screen! No notch, make it like Samsung S8 only on iOS!
Reply · Like · Mark as Spam
3 More Comments
Recent