Huawei has surpassed Apple to become the world's second largest smartphone vendor, according to Gartner. The company reportedly sold more smartphones in the second quarter of 2018 than Apple.

"Huawei’s smartphone sales grew 38.6 percent in the second quarter of 2018. Huawei continues to bring innovative features into its smartphones and expand its smartphone portfolio to cover larger consumer segments," said Anshul Gupta, research director at Gartner. "Its investment into channels, brand building and positioning of the Honor devices helped drive sales. Huawei is shipping its Honor smartphones into 70 markets worldwide and is emerging as Huawei’s key growth driver." 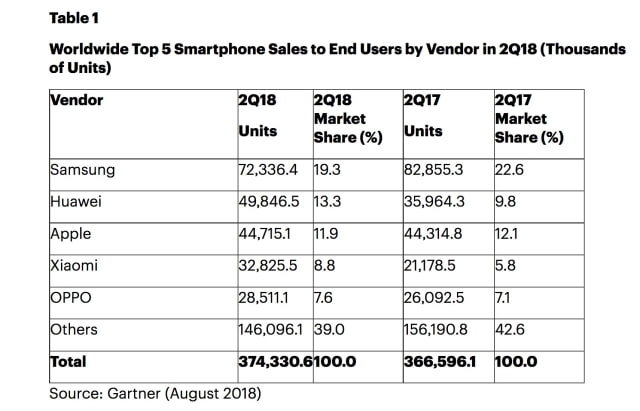 Despite sales declining 12.7% year over year in Q2, Samsung maintained its number one spot.

Apple's performance was nearly flat in Q2 ahead of new iPhones models expected in September.

"Minimal incremental value in Apple's current-generation flagship iPhones led to slower growth in the second quarter of 2018," said Mr. Gupta. “Demand for the iPhone X has started to slow down much earlier than when other new models were introduced.”

Android extended its lead over iOS reaching 88% market share compared to 11.9% for iOS.

Check out the chart and hit the link for the full report.