Microsoft has announced a special event for October 2nd in New York City. The fall press event will start at 4PM ET / 1PM PT and focus on the company's latest hardware, software, and services.

It's likely that Microsoft will update its existing Surface hardware but a major redesign of the Surface Pro is not expected until next year. The Verge notes that the Surface Studio is two years old and should be getting an update.

The fall event will also likely include a focus on Microsoft’s services and hardware across both home and work, and how apps like Your Phone play into that. Microsoft did a similar thing for both the Surface Studio and Surface Laptop launch, with apps and services that went beyond just a hardware unveil. Microsoft is starting to reveal its next Windows 10 update features, codenamed 19H1, so we’ll likely see some of those at the event. We could also get a closer look at the Surface Hub 2.

Microsoft's event is being held a couple weeks after Apple's big iPhone event and a week before Google's Pixel event. Although there have been rumors of a Surface Phone, sources say the device is not yet ready for release. 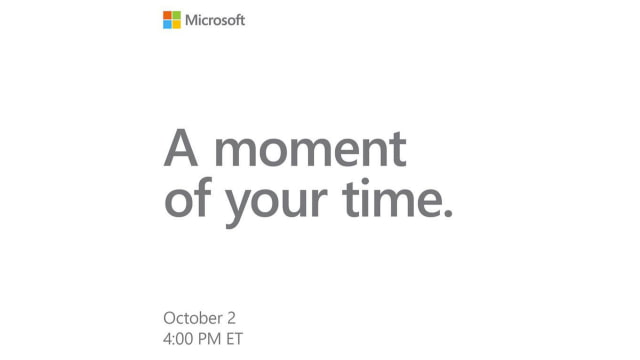 dgadirector - September 7, 2018 at 9:24pm
Even their ad for it looks like an Apple ad. They’re just not a creative company. They need to stick to whatever it is they think they do well. Ugh.
Reply · Like · Mark as Spam
Recent