Samsung had been one of the leading investors in Corephotonics, having participated in two out of three of the company’s funding rounds. Founded in 2012 by optics and miniature digital cameras expert David Mendelovic, Corephotonics develops dual camera technologies designed to improve the performance of smartphone cameras. To date, the company raised $38 million, according to Pitchbook data.

Notably, Corephotonics is the company that sued Apple in November 2017, accusing it of copying its dual aperture camera technology for use in the iPhone.

As one of its first acts as a company, Corephotonics reached out to Apple in the hopes of establishing a strategic partnership. Corephotonics received many encouraging reports and positive feed back from Apple about its technology, but the parties never concluded a license to the Corephotonics technology. In fact, after one failed effort to negotiate a license, Apple's lead negotiator expressed contempt for Corephotonics' patents, telling Dr. Mendlovic and others that even if Apple infringed, it would take years and millions of dollars in litigation before Apple might have to pay something.

In January 2016, Corephotonics learned that amount the new iPhones Apple would introduce later that year was an iPhone 7 Plus with a dual-aperture camera -- precisely the technology Corephotonics claimed in its patents.

It's unclear if Samsung will continue to pursue litigation against Apple after completing the acquisition. Currently, Corephotonics has developed a triple-lens camera system with a max 25X zoom. 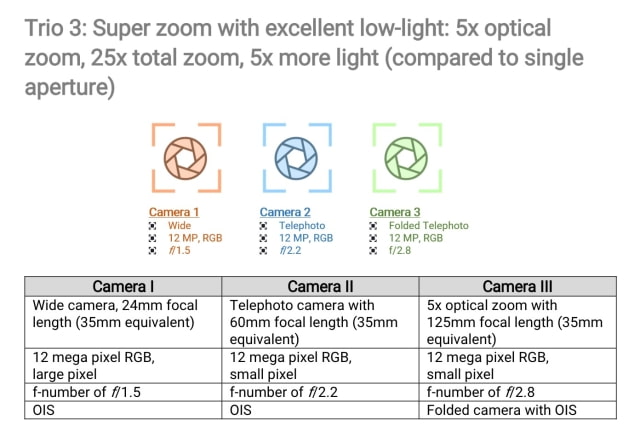