The worldwide wearable market grew 31.4% in Q4 2018 reaching a new high of 59.3 million units shipped, according to IDC.

Growth in the market was driven by new wearables launching during the months leading up to the holiday season as well as new smartphone launches as many were bundled with wearables from leading brands. Shipments for the entire year of 2018 grew by 27.5% with 172.2 million wearables shipped. Much of this growth was attributed to the growing number of ear-worn devices as they captured almost a quarter of the market during the year. 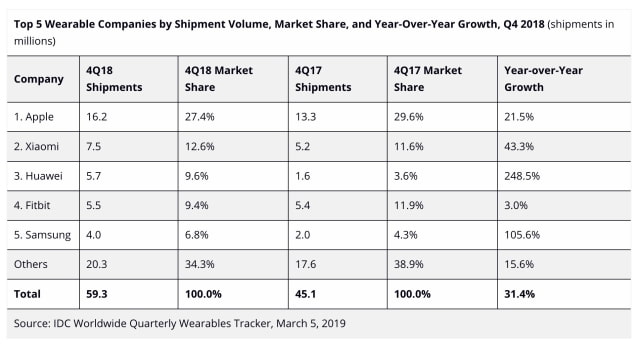 Smart watches grew 55.2% year over year and accounted for 34.3% of the wearables market. Wrist bands accounted for 30% of the market and ear worn devices captured 21.9%.

"The market for ear-worn wearables has grown substantially this past year and we expect this to continue in the years to come," said Jitesh Ubrani senior research analyst for IDC Mobile Device Trackers. "It is the next battleground for companies as these types of headphones become a necessity for many given the exclusion of headphone jacks from modern devices. Add to that the rise of smart assistants and in-ear biometrics and companies have the perfect formula to sell consumers on a device that's complimentary to the device ecosystem that lives on their wrist and in their pocket."

"Smartwatches, meanwhile, grew 54.3% and accounted for 29.8% of all wearable device shipments in 2018," said Ramon T. Llamas, research director for IDC's Wearables. "Apple accounted for nearly half the market and followed by a long list of companies that posted double- and triple-digit growth. What resulted from this was a growing list of devices available at multiple price-points to meet the needs of a diverse market."

Apple maintained its position as the number one wearables vendor shipping 16.2 million devices in 4Q18. Of those, 10.4 million were Apple Watches.

The Series 4 has been off to a very strong start and IDC anticipates this to continue as more healthcare organizations and consumers adopt the latest device. The remainder of Apple's shipments were comprised of AirPods and Beats headphones in the ear-worn category. 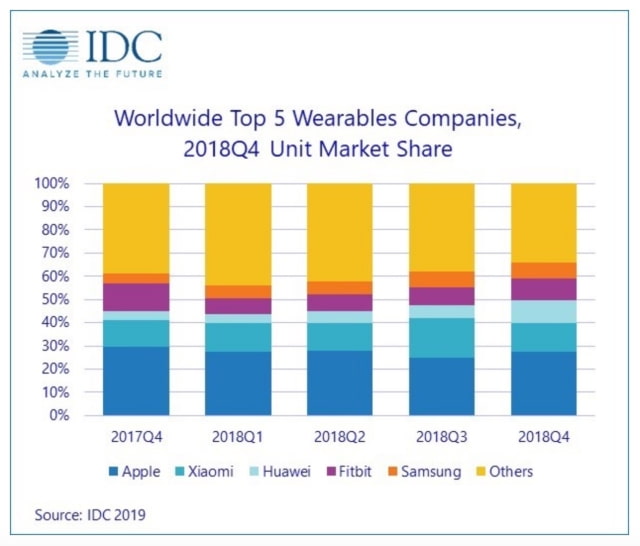