Apple and The City of San Diego have announced that the company plans to increase its employment in the city by 20%.

Apple now plans to add 1,200 employees in San Diego within the next three years, with almost 200 of those employees in place by the end of the year. As part of a nationwide expansion, Apple announced in December that it would establish a new site and job opportunities in San Diego.

“Apple has been a part of San Diego for nearly 20 years through our retail presence and small, fast-growing teams – and with this new investment we are proud to play an even greater part in the city’s future,” said Tim Cook, Apple CEO. “You don’t have to try too hard to convince people that San Diego is a great place to live, work and do business, and we’re confident our employees will have a great home among the community there.”

Apple cited San Diego’s successful efforts to diversify its economy, incubate new industries, broaden its talent pool, build partnerships between academia and the business community, and maintain a superb quality of life as reasons for its expansion to America’s Finest City.

“There isn’t a city in the U.S. that can offer the talent, infrastructure and community that San Diego can,” said Mayor Faulconer. “I invited Apple to increase its growth in San Diego, and on behalf of a grateful city we’re delighted they accepted our invitation. Apple’s inventions have literally changed the world, revolutionizing how we communicate, create, do business and learn. As Apple continues to innovate and introduce new products, we will be proud to say that San Diego is a part of it.”

“We were excited to announce in December that we planned to grow our presence here and add one thousand jobs, and then Mayor Faulconer and members of his team very thoughtfully and convincingly walked us through everything the San Diego region has to offer,” said Kristina Raspe, Apple Vice President of Global Real Estate and Facilities. “So we went back and sharpened our pencils and increased our investment.”

San Diego will become a principle engineering hub for Apple with new positions distributed across a number of specialty engineering fields, to include both hardware and software technologies. While Apple hasn’t yet settled on a location, plans are also underway to develop a campus that will feature hundreds of thousands of square feet of office, lab and research space. 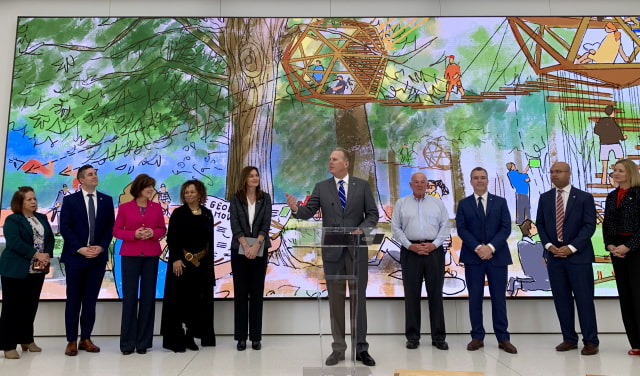