Apple has officially announced a March 25th special event, sending out invites to members of the press today. The email had an animated film reel countdown on opening.

The company is expected to introduce its news subscription service and its much rumored video service at the event. Apple will likely show off clips from shows that are in development, including a morning news show drama starring Jennifer Aniston, Reese Witherspoon, and Steve Carell.

Sources claim that the video service will launch this summer or fall. Additionally, Apple is purportedly planning to offer third-party subscription services that will be sold as a la carte add-ons.

Although the announcement clearly has a content focus, it's possible Apple could use the opportunity to launch new iPads, its AirPower wireless charging mat, and new AirPods.

Apple's event will take place in the Steve Jobs Theater at 10:00am PDT on March 25th. Please follow iClarified on Twitter, Facebook, Google+, or RSS for updates! 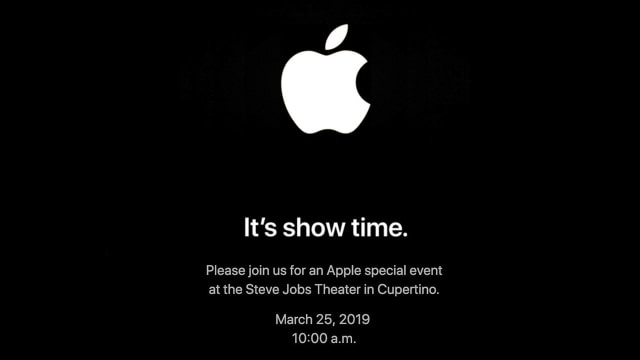 PaulieP - March 12, 2019 at 6:31am
Apparently you missed the one where the NEW Galaxy S10 face recognition is easily hacked compared to Apples WIN with Face ID. Keep thinking that apple is failing and sheep it up to Samsung Bucko.
Reply · Like · Mark as Spam
Recent